The Social Gospel of Christ – and Our Place In It 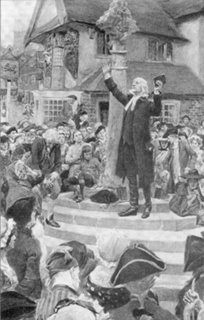 The Gospel of Christ knows no religion but social, no holiness but social holiness…You cannot be holy except as you are engaged in making the world a better place. You do not become holy by keeping yourself pure and clean from the world but by plunging into ministry on behalf of the world's hurting ones. – John Wesley, 1739

Our world is guilty of a lot of perversions, but in my opinion one of the worst today is the emphasis we have placed upon personal evangelism with little regard for any social emphasis. Salvation is far more than personal and individual; it is communal and corporate. Jesus didn’t tell us to do what he said, be saved, and keep it to yourself. Nor did he say “It’s all about you and me.” He told the disciples (plural), “Follow me, and I will make you fishers of men." The Great Commission: “Go therefore and make disciples of all nations, baptizing them… and teaching them…”

That’s what Wesley meant by social religion – it’s not just individualistic, and it’s not just personal; it’s a both/and, not an either/or: “You do not become holy by keeping yourself pure and clean from the world.” It’s quite obvious that Wesley believed as Christ did that we are supposed to be in the world while not becoming of the world.

Last Wednesday night, one of our church members made a profound statement: I asked the question, “What is our answer to the question, ‘Are you saved?’” Without expecting it, the answer that came out? “I’m working on it!” It was a great answer.

In fact, isn’t it the perfect answer?! Salvation is personal AND social, if Jesus is Lord of all. Can we serve Jesus if we don’t show love and concern to others? Christianity HAS to be a social religion; if it’s not we’re not practicing Christianity, and our salvation may be in question. In fact, it moves us to the next obvious question: when is our salvation complete?

If we love God with our whole hearts, and we love our neighbors as ourselves, that will mean we are involved and engaged in the culture we live in – always and forever. It means we sponsor (and participate in) blood drives at our church, and a thousand other things we do or haven’t even thought about. By these and so many other ways we witness for Christ. It means that all of the acts of piety and holiness that John Wesley spoke of are ESSENTIAL for us in working out our salvation. “Faith without works is dead,” (James 2.17).

Maybe we ought to get to work on it!

Getting Old Ain’t So Bad

My father tells me that, given the alternative, getting old isn’t so bad. As I get older, I find that I resemble that remark. 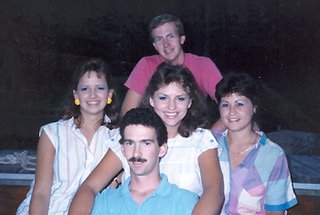 Earlier this week, I gathered with several folks that I worked with twenty summers ago (1986!) at Lakeshore United Methodist Assembly, our annual conference’s camp, conference, and retreat center. Twenty years ago, I weighed 118 pounds. Tom had hair. All of Sheila’s hair was the same color. 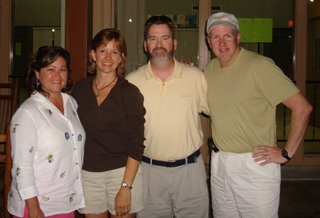 Four out of our six were able to attend. A lot has changed since then (except for Kathy – who we believe has made some sort of pact with He-Who-Must-Not-Be-Named). I now weigh 200 pounds. Tom’s hair is thin. We buried Don several years ago. Gina’s had three kids, so if nothing else her personality and disposition has probably undergone changes.

But getting old really isn’t that bad. When we worked that summer of 1986, there were six people on summer staff. Now, in 2006, there is over five times that many! Progress is a good thing; Lakeshore has grown in its mission and ministry: making more disciples.

Age is really a good thing – and it’s been a blessing in our tradition of faith for longer than just 20 years:

Abraham is going to become a large and strong nation; all the nations of the world are going to find themselves blessed through him. Yes, I’ve settled on him as the one to train his children and future family to observe God’s way of life, live kindly and generously and fairly, so that God can complete in Abraham what he promised him... Abraham lived 175 years. Then he took his final breath. He died happy at a ripe old age, full of years, and was buried with his family. - Genesis 18.18-19, 25.7-8

I think about all the changes that have been made in people who have walked the grounds of that camp: how their lives have changed, how their faith has been shaped, how their souls have been healed, and how their God-given gifts have been realized. God, being the skilled potter he is, takes us in the shape that we are and transforms us. Abused kids know that a good and caring Father loves them and claims them. Neglected kids know that there is a God who listens when they cry out and when they pray, who walks by their side. And in a camp that becomes a sanctuary to many, everyone who enters knows that they are safe, they are loved, and they are claimed. Hopefully, they leave to go into the world to be transformers, witnesses, and peacemakers.

Some things stay the same: the lake looks the same, some of the old cabins are still there. I still tell too many stories, Tom’s memory and enthusiasm is still strong, Kathy’s gentle strength is still inspiring, and Sheila’s laugh and beautiful smile is still infectious. I suspect Gina is still as gorgeous as ever, and if Don was still alive I imagine he would be shooting basketball with the best ballplayers in the camp – and still winning a few games with his unblockable hook shot. Don's final breath wasn't at a ripe old age, but I find comfort in knowing that he is with family among the communion of the saints. I'm glad to have him rooting for us.

Whether some things remain the same, or things undergo change, getting old ain’t too bad if we allow God to work through us. God isn’t finished with us yet; we have a lot to learn… and a lot to teach. 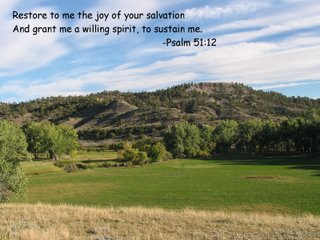 Create in me a clean heart, O God;
And renew a right spirit within me.
Cast me not away from thy presence;
And take not thy holy spirit from me.
Restore unto me the joy of thy salvation;
And uphold me with a willing spirit. – Ps. 51:10-12

It occurs to me that, like most folks, I’m usually more ready to share my burdens than to lift up my joys. So I’m going to remedy that today.

It’s been a great two weeks; I saw old friends at Annual Conference, I spent Friday and Saturday with my father, I got to baptize a baby on Sunday, and I saw very old and good friends on Monday. My wife and daughter are spending a week with family – and family time is always good time.

My father and I rode around the beautiful hills of the Shawnee Forest on Saturday; I had no idea that such beautiful countryside was but an hour's drive away. What a marvelous piece of God's creation!

The bishop fixed the pastoral appointments for 2006-07… and my name is next to “Reidland” for another year. That’s good to me, and I hope it’s good to you.

Do we ever really realize how blessed we are… and how we’re blessed to be a blessing? That should make the “seed scattering” of Sunday’s Gospel reading a whole lot more joyful. Too often Christianity is portrayed as rules and regulations. Why can’t we make it an invitation to live a life more joyful and meaningful? That certainly seemed to be the intention of Christ.

Don’t keep your joy to yourself. There’s a world that desperately needs to hear it. 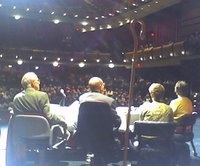 This is my view of the Memphis Annual Conference at the Luther Carson Four Rivers Center in Paducah, KY - a beautiful venue in our fair city.

The object behind the bishop is a crozier. But around these parts of Kentucky, we call it a stick.

You can see the latest conference procedings here.
on June 06, 2006 No comments: