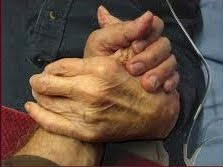 As a very young minister, I remember making one of my first nursing home visits. It was to the mother of a church member suffering from advanced dementia. The family asked me to bring communion one Sunday afternoon to the nursing home and that they would gather the whole extended family there. The woman didn't know anyone: me, the staff, or any of her family. She responded very little to anything anyone said. But as I gave her communion, she spoke very clearly, "You forgot the other part." I asked her which part. "You know. 'We do not presume to come to this thy table...'" Well, I did know... barely. And while I struggled to remember that prayer from my childhood memories of Holy Communion, she helped me get through it. Never missed a word. But right after that, her daughter helped her get back into her bed. She cussed us all a blue streak of words that would have made a sailor blush. Yet her daughter calmly and lovingly laid her down and said, "I love you, Mom." As we left the room, she told me, "Once an adult, but twice a child."

I am finally getting that. Taking care of your children can certainly be trying. But taking care of an aging parent is more than trying - it can be gut wrenching. It is very hard to "honor" mother and father when you have to treat them like one of your children: with respect, but with authority.

As I write this, my father lies in an ICU bed, victim of an intraventricular hemorrhage (IVH) more than likely caused by his high blood pressure. It has robbed him of his memories. He doesn't know me or my brother and struggles to make sentences that make sense. My brother says, "His hard drive is fragmented." Yet like the woman I mentioned above, Dad and I sang "Blessed Assurance" and "Church in the Wildwood" (he sang the bass part in the chorus) and he didn't miss a verse. I had to read some of the verses off of my iPhone - but he needed no such help. Such are the mysteries of brain dysfunction and dementia.

My once gentle, somewhat eccentric but kind-hearted father is currently in restraints, and was earlier cussing and yelling at me for torturing him, telling me that I should be ashamed of myself for allowing this to happen. The more he yelled, the more his heart rate increased until it became dangerously high, as did his blood pressure. The pastor in me trained in pastoral care tells me that this is not my father talking, but the disease. The son in me, however, is having a hard time witnessing it, though. Finally, a stronger sedative has allowed him to rest peacefully.

I have no idea what the future holds for my father. How much damage did the IVH cause? Does he heal and get his memories back? Does his dementia get worse? Does that mean living in an assisted living facility or a nursing home? Of course, no one can answer these questions.

Jesus told Peter, "When you were young you dressed yourself and went wherever you wished, but when you get old you'll have to stretch out your hands while someone else dresses you and takes you where you don't want to go." I think of what is going on with my brother and me regarding Dad's welfare and care as "role reversal." But the truth may be that it is simply the circle of life, and just an extension of my call as a disciple: to feed and tend the sheep.

Even if it's one of your own parents.