Clothes Make the Man (or Woman)? 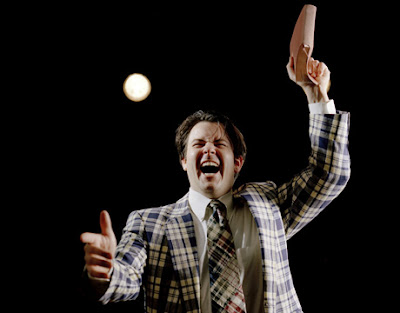 I never knew where this phrase came from until the other day; it's a Mark Twain quote. "Clothes make the man. Naked people have little or no influence on society. "

Hardly a quote intended to impress the need for dressing to the nine's. Sounds like it means that this is what separates us from the animals. I'm glad we wear clothes!

On one of the news programs this morning there was a very long segment on what the presidential candidates were wearing. Of course, all the hubbub about Gov. Palin's outfits figured prominently, along with Sen. McCain's $500 shoes, Sen. Obama's 5-6 suits, Sen. Biden's hair (or lack of it), and so on. And the bottom line? "People watch what others are wearing, but it probably has very little to do with how they vote." 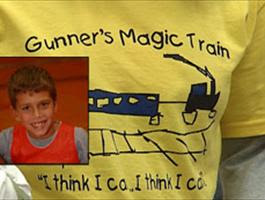 At 1:43 PM, G-man got on the train to the Church Triumphant, where God will wipe all the tears from his eyes, where there is no more cancer, no more death or mourning or crying or pain, and all things are made new. He's healed and cured.

Thank you, Father. Bless those of us who grieve, especially Gus and Janna.

Happiness Is Being A Pastor 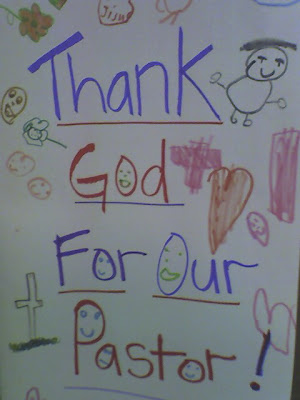 Today, between worship services, the K-2 Sunday School class presented me with this card - which is 1/2 the size of my office door!

I am a very, very blessed man.

Happiness Is Being a Labrador Retriever

I have been staring out of the office window for about an hour - I have a writing deadline next week that I am going to be hard-pressed to make, and as luck would have it, I have "block." Having Block is bad enough; worse, the writing deadline is for a homily resource - sermon illustrations for Lent! Writer's Block and Lent are a very bad combination!!

Since it isn't 5 PM yet, staring out the window is my only inspiration. About 30 minutes ago, a black labrador retriever walked by the window. All of the sudden, he took off like he had been scalded. He was chasing a squirrel, and they did a dos-si-do before the squirrel found a tree and ran up it. The dog was barking, jumping up at the tree, and then backed off and just looked up... and smiled that smile that only labradors have.

Watching them took me back to a memory I had when I was in seminary. It was the spring, and I was umpiring a small college baseball game. I can't remember the school, but what I remember was that the field was open along the left and right field foul lines past the dugout - no fence. Some of the fans sat in lawn chairs along the lines, and saw a grill going cooking burgers and such.

About midway in the game, a player from the visiting team hit a ball into an outfield gap and was trying to turn it into a double. As the runner rounded first base, I saw a black streak out of the corner of my eye come from the lawn chairs on the right field side. It was a black lab, and he was running full-throttle... toward the runner. As the runner was coming to second base, the dog clipped him. Hard. My partner stopped the game. I think the second baseman helped the runner up. Everyone was laughing on both teams except, of course, the runner. 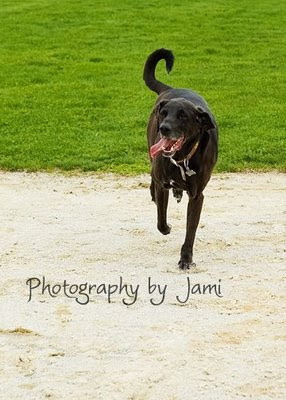 Efforts to corral the dog were largely unsuccessful. The more players tried to chase him down, the more the dog thought it was play time, and that labrador retriever smile was just getting wider and wider. After a couple of minutes, he simply trotted back over to the right field side and laid down by the grill, where I'm sure someone fed him a hot dog or two.

While everyone else was trying to get their composure back, the catcher was having no luck in doing so, laughing harder and harder, tears coming out of his eyes and trying in vain to remain in an upright posture. Finally, he manages to crouch down and the pitcher throws a pitch. I don't remember if it was a ball or strike, because he started laughing uncontrollably again. The runner at 2nd base is not at all amused, so I told him, "Man, you better get a hold of yourself, or that guy is gonna come over here and whoop you."

The catcher simply said, "He'll probably whoop me for sure if he finds out that's my dog."

Now, I don't know who laughed harder, the batter, the catcher, or me. But I do remember that we had to stop the game. Again. 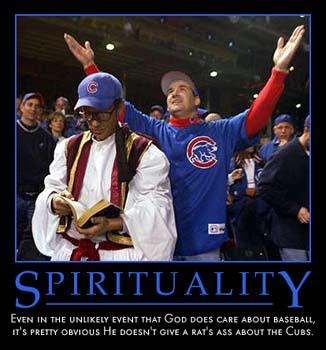 I am not a die-hard Cubs fan, though I do have a preference for the National League. But it's hard not to root for the Cubs if they get into post-season.
All I can figure is that the Cubbies must be cursed. A great regular season... and then in the playoffs, they boot the ball out in the field, and have no bats at the plate.

I just don't know what else to say. I'll just let the psalmist lament for me:

1 How long, O LORD ? Will you forget me forever?
How long will you hide your face from me?
2 How long must I wrestle with my thoughts
and every day have sorrow in my heart?
How long will my enemy triumph over me?

3 Look on me and answer, O LORD my God.
Give light to my eyes, or I will sleep in death;

4 my enemy will say, "I have overcome him,"
and my foes will rejoice when I fall.

5 But I trust in your unfailing love;
my heart rejoices in your salvation.

Please keep Cubs players and fans in your prayers. Their mourning will not be short.

We Look Good – On Paper

The United Methodist Church is a great church… on paper; just check out a Book of Discipline. The 2008 BOD won’t be published until January, but the 2004 BOD has 832 pages in it and is 6 ¾” x 9 ¼”. That compares to my 1984 copy which had 769 pages in it and was 5 3/8” x 8 5/8”. Our annual conference has 25 “Special Days” to take place on Sunday celebrations of worship, raising awareness of different ministries in our conference. We have lots of sub-groups, divisions, and special interests in our denomination that have their own offices, complete with budgets, staff, special study guides, even “lobbyists” that push their causes. United Methodism, by all appearances of structure and budget, must be busting at the seams.

Sadly, we know that’s not true. And my blog title is a misnomer, because while the METHOD of Methodism looks good (on paper), the facts and figures look very bad – we are continuing to lose members.

I’ve said this in blogs before – United Methodism is awfully good at majoring in the minors. Take the items in the first paragraph:
Our UMC rank and file leadership seems to go into two directions: (1) Are very wary and resistant of change, even in the midst of dying. (2) Realize change is needed, and often have to leave/ditch Connectional resources and ties to do so. 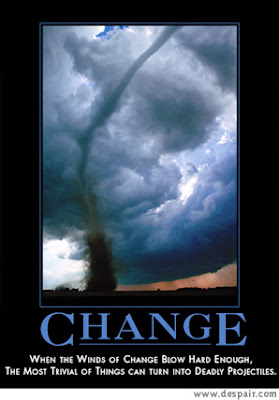 Resistance to change seems to be inherent to United Methodists – as progressive, inclusive, and “in touch” as we claim to be, I wonder if we really are? Have we become so inbred that we don’t want change and content to die? If this is true, we have really played a bad joke on ourselves. Instead of doing a 180° - as John Wesley intended us to – could it be that we did a 360°, and we are right back where we started? Are we living out Wesley’s greatest fear?

I am not afraid that the people called Methodists should ever cease to exist either in Europe or America. But I am afraid lest they should only exist as a dead sect, having the form of religion without the power. And this undoubtedly will be the case unless they hold fast both the doctrine, spirit, and discipline with which they first set out. – John Wesley, 1786

I attended our annual conference's Connectional Ministries Team meeting the other night. I have to admit - I usually don't attend (I'm on it by virtue of a conference commission I chair). But the ideas outlined to go to the bare bones, re-prioritize, and to make disciples energized me.

What would happen if we asked ourselves, every time we took action as a conference, committee, or church: "How does this act/action contribute to
For one thing: it might put into question the very existence of some of our conference entities. Or at least question how we've operated them for some time (I know I am having to ask myself these questions as the chairperson of a conference committee).

To do these things, we will have to take our conference mission to heart: Making disciples of Jesus Christ who will transform our church and the world, through bold decisions, faithful sacrifices, and courageous actions.

Change is hard. Bold decisions are risky. Sacrifices are uncomfortable. Courageous actions take stoutness of heart. Sounds a lot like the beginnings of Christianity.

This could be exciting!