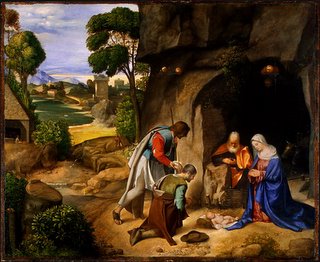 Merry Christmas to all.

I wrote a few weeks ago that some things in life are “messy.” Another statement that I would put right next to that: “Sometimes, reality kicks in. Life happens.” (I think we all know the more colorful word we often substitute for “life.”)

Sunday was such a joyful day at Reidland; the singing of familiar hymns, hearing a beautiful choral arrangement sung, the baptism of a baby girl, and the reading of the Annunciation as re-corded in Luke’s Gospel. It was one of those days that I said to myself, “Today, we have worshiped the Lord!”

Late Sunday evening, I received a phone call. The Rev. Henry Jeffries, a part-time pastor, had a heart attack during one of the worship services and died. I was Henry’s clergy mentor and the news shocked me to the core. Henry was such a gifted pastor and kind-hearted man. His death at this time of the year rekindled my memory of a December in 1999, when my grandmother died on Christmas Eve (my parents’ anniversary) while I was flirting with my own death in a cardiac care unit. My mother was so upset that she didn’t even attend her own mother’s funeral, and I suspect these events hastened her own death nine months later. I fully understand how Christmas can bring bad memories for some of us.

Henry’s recent death reminds me that even in this season of joy, “life happens.” But this season also reminds me that… life happens! The connection between Christmas and Easter is unmistakable, and the thread running through it is life, joy, and peace. A child is born of a Virgin named Mary, who instead of saying, “Woe is me,” says, “Here I am” – and then sings her thanksgiving and joy to the Lord.

You hear me say often in worship that we are Easter People. I think that means that we’re also Christmas people. Amidst the tragedies of life, at Christmas time we are reminded that at the birth of Jesus, life happens: life emergent, life abundant, and life eternal. There is no tragedy, no happenstance, no death that can rob us of the joy of the Christ child, who comes to save the world.

Merry Christmas, and God Bless us, everyone. 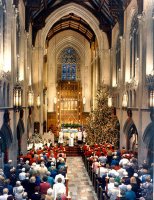 This past week, I became very disappointed in some things that I read. Southland Christian Church, the largest church in Kentucky, will not be holding worship services on Sunday, Dec. 25th. Neither will Willow Creek Church outside of Chicago, another “megachurch.” If canceling Sunday worship services on Christmas Day is going to become a trend, will Easter be next? Asbury professor Ben Witherington, a United Methodist, said this (and this) on his blog page:

Our culture does not need any encouragement to be more self-centered and narcissistic or to stay at home on Sunday. It is already that way. Christmas above all else should be a day when we come together as the body of Christ to worship and adore the Lord Jesus. Christmas should be the day above all days where we don't stay home and open all those things we bought for ourselves INSTEAD of going to church. Christmas should be the day when we forget about ourselves for a few hours and go and honor the birthday of the great King, our Savior.

I am pleased that we are a traditional church. But I don’t want us to just stop there – I think we can be both a traditional church AND offer something to those who are unchurched. But I never want to compromise the faith in the process. To me, not worshiping on Sunday just because it is Christmas Day is an unacceptable compromise.

Much Ado About Nothing

My daughter is more excited about seeing Narnia than she was about The Lord of the Rings or Harry Potter. Nothing has made my heart leap more than to see her read C.S. Lewis. The pastor at the last church I served is encouraging folks to see the movie as well. What could be more encouraging!

Yet our denomination seems somewhat discouraging about the movie. Or maybe it's encouraging. Actually, I'm really not sure what the message is; it's like reading a letter from the Council of Bishops. It seems that the Women's Division of the General Board of Global Ministries has learned to speak Bishopspeak as well. The whole statement can be read here.

Shane Raynor at Wesley Blog said that he couldn't have written a parody that would have been as outrageous as this press release. I tend to agree.

A quote: "We want our members to see the movie. Talk about it with your kids. Talk about the message of the resurrection and the lessons it shares from our faith... But then, we need to help people understand that by commercializing the message, the marketers are destroying the example of sacrifice."

Sometimes, I think our church leaders would do well to heed the lesson of Xenocrates: "I have often regretted my speech, never my silence." Better yet, the words of the preacher in Ecclesiastes: "There is a time to keep silence."

Having said that... maybe I ought to shut up, too.

I saw on two other blogs that Southland Church in Lexington (KY) - a "megachurch" - is going to be closed on Christmas Day. I couldn't believe that, so I went and checked their site and the Christmas schedule (click here).

Are we going to bow to convenience so much that Christians don't even have to worship on Christmas Day anymore?

Questions We Need to Continually Ask

These are questions that we as a church are going to have to ask ourselves everyday, every time a committee meets, and every time we pray about our church’s ministry. Why? Because I believe that they are the very questions that strike at the heart of who we are supposed to be. These are the questions we have to ask when we look at how the church should be publicized, structured, and operated, and that includes designs for worship, pastoral care, preaching, weddings and funerals, and fundraising.

As I said a few Sundays ago, a common definition of an active church member could be this: “One who devotes his/her time to the care and feeding of the institutional church.” The problem with that is that most unchurched people have no concept of the institutional church… because they have no concept of Christ! To be an effective church, we are going to have to equip and empower ourselves to engage culture in creative and meaningful ways. In the words of Adam Hamilton, a more meaningful definition of an active church member will no longer be defined by their contributions of time, talent, and treasures within the church; but will be defined by whether church members are engaging their culture in meaningful ways outside the walls of the church. In short: members need to become missionaries to the culture.

One person (Reggie McNeil) is more direct: "Until we bless people who 'go out' from us to reach people who may not come to us, we will continue to have a kingdom vision that is shrink-wrapped to church programs and church real estate." Ouch.

If we were to adopt such a process, all we will be really doing is going back to the roots of Methodism – which began as a renewal and missional outreach program of the Anglican Church. Or even more basic are the words of Jesus: “Go out and make disciples, teaching and baptizing in the name of the Father, Son, and Holy Spirit.”