Proud of Our OWLS - Again!

This article ran in the United Methodist Reporter recently. I couldn't be prouder of our church.

Pearl Wood and Flo Crooks tell preschool children what it was
like to live in the 1950s, including the popular clothing styles that were worn.

Katherine Flowers, 90, had never tried line dancing before in her life. Mary Ann Sturma, 82, had never played a musical instrument. But Ms. Flowers and Ms. Sturma recently tried each for the first time at OWLS.

Older Wiser Laughing Souls (OWLS) is the older adult ministry of Reidland United Methodist Church in Paducah, Ky., and both ladies can’t say enough about it.

“It’s a group where you can find fellowship, things to do and people who care,” says Ms. Sturma. “It’s just great.”

The OWLS meet once a month for a meal along with an activity at the church or an outing to a nearby restaurant or attraction.

“If there’s something of interest in the area that the bus can go to, we go,” said Ms. Flowers.

“We get to do things we might not do ourselves, because many of us do not like to drive at night,” said Ms. Sturma.

“This program has really bloomed,” said Cathy Burkhead, volunteer co-coordinator of OWLS. “The older adults have a voice and they are a big part of our church now.” 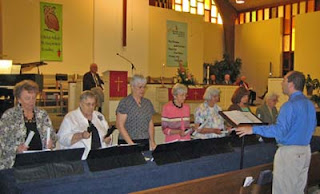 The group has about 50 regular participants; Reidland’s weekly worship attendance averages around 200. Like many United Methodist churches, Reidland’s congregation is aging. More than 30 percent of the church’s membership are people 70 and older.

OWLS began in 2005 after organizers attended an older adult workshop at nearby Trinity United Methodist.

“We came away with wonderful ideas and books to guide us in this ministry,” said Ms. Burkhead.

And things took off from there. One church member, a recent retiree, obtained a special driver’s license so that she could drive the church bus. Another started a hand chimes group called the Owleluia Chimers, which plays at worship services. In 2007, the older adults’ group was invited to take charge of the church’s worship service.

“It was so warmly received that we have been asked to do it every year,” said Ms. Burkhead. “The service provides the opportunity for the congregation to celebrate the gifts and contributions of older adults, and it is loved by the entire congregation.”

“It’s not difficult to get seniors involved,” said Ms. Burkhead. “We survey them once a year and ask what types of programs and speakers are of interest.”

Ms. Sturma says she’s volunteered more than 15,000 hours at a local hospital—a project she loves—but it’s easier to make friends and find fellowship at OWLS. She’s dealt with a number of health problems and surgeries in the last 15 years or so, and says fellow OWLS support each other with similar problems.

Ms. Sturma is also quick to praise OWLS for serving older people in the community who are not members of the church.

“I have a Catholic friend who has no relatives in town, no way to drive and no way to pay,” she said. “But they always pick her up and include her in all the outings and meals, free of charge. I think it’s great that they reach out to others outside of the church. It’s food for the body and the soul.”

“We always provide a meal with our programs and activities, and we carry lunches to those who can’t make it,” Ms. Burkhead said. “That’s a big part of our program.”

“The first thing that is needed for a strong older adult ministry is a group of volunteers with a love and a desire for working with older adults,” she said.

But Ms. Burkhead, along with co-coordinator Lynda Cochrum and half a dozen other volunteers, say they find the investment of time pays off many times.

“Participating in an OWLS event, I feel like we sat with Jesus and walked with him,” she said. “The participants are so appreciative and thankful.”

Ms. McClure adds that older-adult programs must be tailored to the needs and interests of participants. Programs on crime protection, identity theft, assisted living and planning for the end of life have been effective in the older-adult ministry she coordinates at nearby Clinton United Methodist Church.

Reidland plans to lead a workshop in the fall to reach out to churches that do not have older adult ministries, with an eye toward partnering with those churches to help them start similar programs.

“It’s very important to have this type of ministry, because these folks have much to give to us,” Ms. Burkhead said. 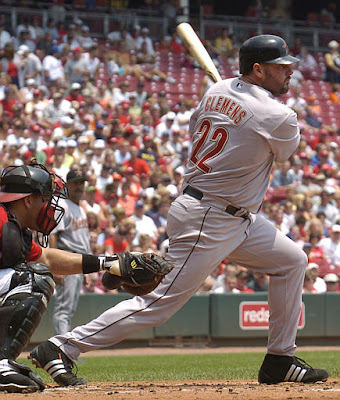 Lex clavatoris designati rescindenda es is a Latin phrase that has nothing to do with religion, philosophy, or wisdom. Translated, it means, “The designated hitter rule has got to go.”

The designated hitter (D.H.) rule is from baseball; in essence, you can substitute a (better) hitter in place of the pitcher – so the pitcher doesn’t have to bat. In major league baseball, only the American League has the DH rule. I’ve never liked the rule, and most baseball purists don’t like it either. (And yes, this is a picture of Roger Clemens batting. A rare event.)

Why don't I like the DH rule? Well, hitting is certainly a part of baseball. Facing a pitcher can be daunting, but it’s also fun. Some say the DH makes the game better, for we see better hitters in the place of pitchers, who don’t normally hit very well. But I disagree: I think the rule enables some players avoid the harder part of the game.

Sometimes, we do the same thing in the church. If we are not careful, we allow our pastors, worship leaders, and Sunday School teachers do our studying and praying for us. I know that I can fall into the same trap. The truth of the matter is that our discipleship is dependent on our willingness to foster and cultivate relationships with others. That begins with our having a personal and corporate relationship with God through Christ.

Don’t let someone “DH” for you when it comes to study and prayer. Do it yourself, and find the joys and blessings in knowing and being known by our Almighty God.

Music has always been an integral part of my life; I am at best a frustrated musician, but I dearly love to listen, admire, and soak it in, and find myself more often than not in conversation with God while I listen.

Anyone who has a child is always moved by hearing Billy Joel's "The Lullaby." You might be even more moved when you know the story behind the song:


Goodnight my angel, time to close your eyes,
And save these questions for another day.
I think I know what you've been asking me,
I think you know what I've been trying to say.
I promised I would never leave you,
Then you should always know
Wherever you may go, no matter where you are
I never will be far away.

Goodnight my angel, now it's time to sleep,
And still so many things I want to say.
Remember all the songs you sang for me,
When we went sailing on an emerald bay.
And like a boat out on the ocean,
I'm rocking you to sleep
The water's dark and deep, inside this ancient heart
You'll always be a part of me.

Goodnight my angel, now it's time to dream,
And dream how wonderful your life will be.
Someday your child may cry, and if you sing this lullaby,
Then in your heart there will always be a part of me.
Someday we'll all be gone
But lullabys go on and on
They never die
That's how you and I will be.

Every song has a story. Here's to praying that we might always be willing to tell our story.

Remembering Who You Are – And Where You Came From 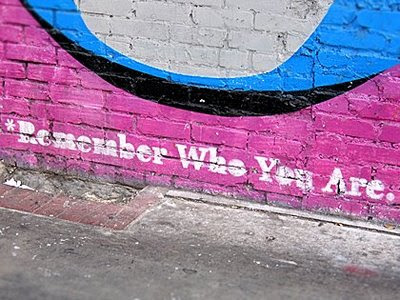 My brother and I took off a few days last week to spend time with some of our extended family. We have not gone back there in almost 15 years for any other reason than funerals, so it was past time. Much of our mother's family has never left the area where several generations of Houghtons, Jamesons, and Garretts lived.

At the end of the month, I am preaching a homecoming service at New Salem UMC in Banks County, Georgia. I served New Salem when I was in seminary nearly 20 years ago.

I remember when I was in high school that I said a term that my mother seriously chastised me for: “white trash” – referring to folks from the poorer side of town. Her words burned into me. “Sky, you are not that far removed from that situation yourself.” And she was right. Southeastern Kansas is incredibly impoverished. Related to that, when I lived in Banks County, Georgia, my salary was $13k, which at the time was the median income for Banks County.

Some folks would be ashamed of talking about such a past, or admitting that they have family in such situations. The reality is I cannot deny my roots, nor would I want to. I am blessed with a large extended family that blesses me. And I suspect when I go down to Georgia in a few weeks, I will realize how blessed I was when I was their pastor.

It was once said about Jesus (by one of his disciples, no less), “Can anything good come out of Nazareth?” Nazareth was secluded by hills, and had a bad reputation for having no culture and a rude dialect – the “white trash” of lower Galilee.

From poverty and the unlikeliest situations, our Savior and Prophet arose. God’s chosen are everywhere… and come from everywhere.