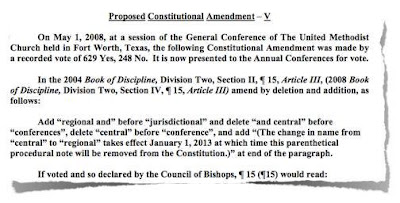 I have no idea if these amendments will provoke debate or boredom. My hunch is most folks won't read them in detail, people will read what has been written in the Reporter, Laity and Clergy Sessions will have some lobbying for and against them, and a few folks will watch the various videos (pro and con) that people have uploaded on You Tube. Fellow blogger Mark Covington has even compiled a host of these writings and videos here.
It is no secret that I am not in favor of the amendments, but it is less about being against "inclusivity" and more about honesty and practicality. If the proponents were honest and would say that this is a referendum about homosexuality and a backlash about one isolated incident in Virginia, it would perhaps institute an honest debate. As it stands, it seeks to institute change through a trap door. Some will say, "Whatever it takes." I don't think the Church can ever begin to be faithful by being dishonest. As the saying goes, "The ends do not justify the means."
Another aspect of all this that disturbs me are the words of a district superintendent in Liberia. While a big selling point to the amendments regarding the restructuring the General Church has been to empower our churches in Africa, Asia, and Europe, the Rev. Jerry Kulah of the Monrovia District says that no African leaders (or for that matter, no grassroots UM's in Africa) were even consulted about the matter. "Most United Methodists in Africa are not [even] aware” of the proposed amendments, much less have an understanding of the changes that could result if the amendments are passed. For that matter, he is “not sure that [most] United Methodists in America are [aware] either.” He concludes his video by saying, "Many of us who are leaders of the church in Africa do not favor passing these amendments right now."
The cynical side of me asks this: Have we become so agenda-laden as a denomination that we would use political correctness to dictate the canon law and doctrine of our church? If that's true, it is possible that we have created a real "P.C." problem: as a denomination, are we going to decide to be pro-homosexual at the cost of being anti-African? I shudder to think what would mean historically, theologically, and practically. Sounds like we are trading off "-isms."
The practical side of me wonders how many unintended consequences will result just by changing Article IV with the addition of "no conference or other organizational unit of the Church shall be structured so as to exclude any member or any constituent body." Does that mean that the UMW, UMM, UMYF, and other bodies and units would be unconstitutional? Does that mean that boards of ordained ministry can no longer examine candidates for ministry? And when it comes to church membership, do people have a "right" to claim membership - and implied discipleship - in the Kingdom of God? The Great Commission says we are to go make disciples. Discipleship requires cost and sacrifice. The amendment could be legally construed to render any questions regarding sacrifice, doctrine, and morality moot, since such things would run tangent to the proposed language, "all persons shall be eligible." Confirmation classes, new membership classes - all unnecessary, and perhaps even unconstitutional.
Practically, as far as the restructuring of the General Church is concerned - no one knows how the amended regional structures will be implemented - or how much it will cost. Given that we cannot afford our present structure, how can we budget and afford another level of bureaucracy?
I don't think that's what we intend, or even what we want. But I don't see how we'll avoid it - and instead of our decisions about church doctrine and practice being decided by the Holy Spirit, they will be decided by the Judicial Council, who will go by the law - which we're about to change.
We have amended the U.S. Constitution twenty-seven (27) times since 1787. We are proposing thirty-two (32) amendments to the UMC's Constitution all at once. My colleague Randy Cooper asks us to ask ourselves two questions of each amendment before we vote:
I can't find many of the amendments to answer either of those questions in the affirmative. I fear that all this will do is further polarize people and issues in a denomination that is losing membership and becoming financially insolvent.
Lord, have mercy.
Christ, have mercy.
Lord, have mercy.
Pax,
Sky+

The Cloud of Witnesses

I got more than I bargained for in teaching Christianity 101 on Sunday nights. While the crowd that has come so far was not my target crowd of younger folks who wanted to know more about the faith, I have found myself challenged by seasoned Christians who want to know even more about their faith. So after dissecting the creeds and examining essential Christian doctrines – and thinking we were done - we are now delving into how God worked through people and history to illuminate His will and wishes for us. As a result, I have had to go back and “restudy” early Christian history and the Early Church Fathers. It is serendipitous that my studies have coincided with the celebration of Older Adult Sunday and our OWLS (Older, Wiser, Laughing Souls) Banquet today – I am so reminded of how grateful we should be for those saints who have gone before us and on whose shoulders we stand upon.

I am reminded of this quote from one of my mentors, Prof. Justo Gonzáles (who always said when getting one of our names wrong that we gringos looked all alike) from his book The Story of Christianity:

Like it or not, we are heirs of… diverse and even contradictory witnesses. Some of their actions we may find revolting, and others inspiring. But all of them form part of our journey. All of them, those whom we admire and well as those whom we despise, brought us to where we are now.

Without understanding that past, we are unable to understand ourselves, for in a sense the past still lives in us and influences who we are and how we understand the Christian message… When we stand, sit, or kneel in church, when we sing a hymn, recite a creed, or refuse to cite one, when we build a church or preach a sermon, a past of which we may not be aware is one of the factors involved in our actions.

Cindy Hubble painted this mural/banner for our use last Sunday morning. It is a reminder to us how important our past is to our future in the faith (click on it to enlarge it). 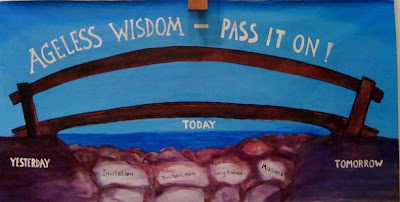 God’s wisdom is ageless. Let us be open to it – and pass it on.

What We Take For Granted – What Is Granted Without Merit 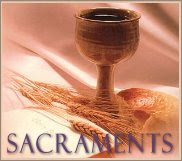 Three things happened to me within 15 minutes that are still affecting me today. Those of you that know me know how deeply I feel about getting back to our Methodist roots where grace and the sacraments are concerned. After Sunday, I feel even more strongly about it.

Two men and I took communion to the unwillingly absent last Sunday. One of them was a man who was near death, another a man recovering from heart surgery, and the third was a couple where the husband has Alzheimer’s. The gentleman who was near death needed our assistance to partake – we were humbled beyond measure. We joked with the man that was recovering from surgery that we were there for “Last Rites,” and he laughed harder than we did. And the couple we served were grateful as well, the wife with words and the man with a peaceful expression after drinking from the cup.

When I take communion to older members who remember the older communion liturgy, I usually serve them with these words: “Take and eat this in remembrance that Christ died for thee, and feed on him in thy heart by faith with thanksgiving.” We were met with tears each time, which brought us close to tears as well.

I pray that we need not wait until death or our last years to finally figure out that God grants us as much grace as we need – if we’ll only open our arms to receive it. I know that I serve as a minister to all of these folks we took communion to on Sunday. But truth be told, on this particular Sunday I was as much ministered to as I was a minister. These people have a faith far beyond my own – and I pray that mine might increase each day.