Last night, I was eating a very late supper with two friends that I officiate basketball with (one of them grew up in a Methodist parsonage). We had officiated several ballgames at a summer high school camp, and the three of us had ridden our motorcycles to the games - both for fun, and to save money on gas. We were remarking how hard our parents and grandparents worked, and how much easier by comparison that we have it. Sending kids to college, paying bills, and the like are still not easy, but we were telling these stories while eating a pretty good meal in a nice restaurant.

There are all kinds of political, social, and economic reasons and theories about why the price of oil is going up, that the government should intervene, etc. I am not fluent enough in any of those areas to risk an opinion there. I just know that the reality is that gasoline costs over $4 a gallon. For some, it is going to be an economic hardship. For me, I am having to reassess priorities and travel.

I can't get around the fact that I have to drive a lot to do ministry. It is never a stretch to drive as many - if not more - miles that I am budgeted to be reimbursed for; it doesn't take long at 50.5¢ a mile! And while my old BMW gets 24 mpg, my old motorcycle got 40. 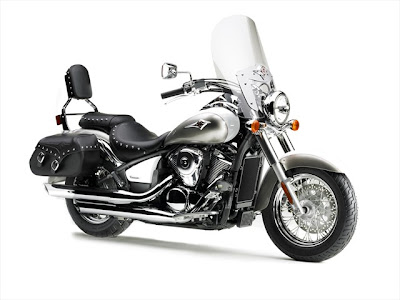 My old bike had a lot of miles and years; it was a 1993 model. So I finally quit being so cheap and bought a new bike about a month ago: a 2008 Kawasaki Vulcan Classic. It averages 45-50 mpg, and has a much bigger tank and engine than my last bike, and is already paying for itself at the pump: I pay half what I used to pay for my car to go the same distance! The weather has been outstanding this past month, and I have ridden to work, on errands, and in making pastoral and hospital calls. Yes, I occasionally run into the occasional storm - that's why they make rainsuits. I also realize from my trip to England that pastors have to be very creative in their transportation because of costs. So instead of just riding for fun, I tend these days to ride out of economics. A strange thing has happened in the process.

I used to loathe driving during work hours - I hate the waste of time that driving takes. You can't run an errand or make a hospital call in less than an hour in Paducah, and if I have someone in the hospital at Vanderbilt, I have just lost a whole day just by driving. It is certainly work that needs to be done, but I often wish I could snap my fingers and be transported directly to my destination instead of wasting the hours driving there.

But I have started enjoying the drive now. Riding a motorcycle is glorious, and the sights are always seen with a 360° view. I get a few stares when wearing a clerical collar, but that's an inconvenience at best. The strange things are the conversations that emerge. Motorcycles are always conversation starters, i.e., "Nice bike." "I'll pay for your gas if you'll pay for mine!" When it gets more interesting is when someone asks, "What do you do for a living?" When I tell them, the reactions range from uncomfortable silence to wide grins. And that sometimes leads to very interesting and blessed conversations and opportunities.

Who would have thought a little evangelism would save me money?

Email ThisBlogThis!Share to TwitterShare to FacebookShare to Pinterest
Labels: Motorcycle

Radical Hospitality – Just Don’t Say It, Do It

Then Jesus went about all the cities and villages, teaching in their synagogues, and proclaiming the good news of the kingdom, and curing every disease and every sickness. When he saw the crowds, he had compassion for them, because they were harassed and helpless, like sheep without a shepherd. Then he said to his disciples, "The harvest is plentiful, but the laborers are few; therefore ask the Lord of the harvest to send out laborers into his harvest." - Matthew 9:35-38

My good friend and colleague Johnny Jeffords recently wrote on his blog about our Annual Conference’s theme, “Radical Hospitality.” He makes a great statement:

Radical comes from the word from which we get "root." Too many of us think of radical as being whacked out - on the fringe. Radical hospitality is the opposite - it moves us to the essential nature of our being - the foundation of who we are. And for the Christian community, that root can be none other than Jesus of Nazareth.

Dr. Jeffords warns us, though, that it doesn’t need to be practiced as the latest action plan or evangelism program – it needs to be practiced in our daily discipleship. In short – practicing radical hospitality is to practice being the essence of Jesus Christ.

Will it get you into trouble? Most assuredly. There was a reason that Jesus was called a drunkard and glutton: he was seen eating meals with prostitutes and publicans, and probably had a glass of wine or two while he did it. When people disapproved of his messages and ministry, they used these things against him. Since he was unmarried, I am sure some of his critics liked to think (and say) that he was either a womanizer or gay.

So, if we’re radical in both our hospitality and our discipleship, we may need to be prepared and prayed up to face the critics and naysayers. Some will say you’re crazy to welcome “those folks” into your church or Sunday School class. Some outside of our church will see our new parking lot and wonder, “I wonder who died and left them the money to do that?” Radical hospitality and discipleship is liable to get Reidland United Methodist Church labeled as “the crazy church.”

I hear RUMC’s preacher has a beard and rides a motorcycle, too…

I am always tired after Annual Conference, but I must say I am very excited about some new direction for our annual conference.

Five new Annual Conference Priorities were announced – and this time not just with words, but with a plan and mechanism in place to implement them:

A Lay Resource Leader (LRL) will be identified in each District. Then, a unique partnership will be formed between the District Superintendent, LRLs, District Lay Leaders & Director of the CMT to address ministry needs. The emphasis? On the local church! We have conference staff in our own district!

Thanks to our own Jerry Severns and James Brockman for representing us at Annual Conference. James also stuck around an extra day to hear Adam Hamilton’s presentation on Wednesday.

It was all a very good celebration of ministry. But it’s good to be home.