Logistics of General Conference 2019 - Making Sure It Works 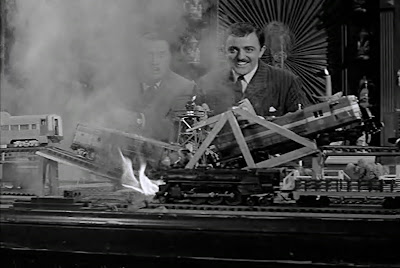 Much has been said, written, and continues to be debated regarding the called session of General Conference 2019, The Way Forward, and the three four several Plans being advocated. I won't add to the many opinions, theological treatises, and scientific theories regarding sexuality, Natural Law, and modern psychology. Everyone has an opinion, and we'll continue to hear about them ad infinitum.

Unless you're Gomez Addams, train wrecks are not fun to watch. Some fear a train wreck is in the making at the called General Conference of the United Methodist Church next month. I hope for the best, and pray that some of the nitty gritty things are being fleshed out, so that the main purpose can be accomplished.

I'm only a fair scholar, a mediocre theologian, and a somewhat-capable church pastor. But one thing I think I'm fairly good at is strategy and logistics, probably instilled upon me at an early age by a few bosses I had in secular life. One of the sage pieces of advice in life given to me was by one of these bosses who had also been my high school principal: "Sky, at the end of the day, all the theories, convictions, and expert opinions don't mean $@&% if it doesn't work. *issing matches [turf wars and power grabs] will insure it won't work." I can't remember what the conversation was about, but the reason I remember his words so well is because he looked me in the eye and grabbed my shoulder when he said it. He taught me a lot about team work, and taught me a lot about life.

With that being said, here are some logistical issues, ponderings, and hopes:


And related to that... what about hiring a registered or professional parliamentarian as a consultant to our chairperson and presiding bishops? We ask our committee chairs and bishops to do an awful lot, and given how (I am guessing) parliamentary procedure could be used as a strategic tool of leverage... and a weapon... it might be good to head off knotty messes before they happen. Plus, we elect bishops for their leadership and spiritual abilities - not their acumen at Robert's Rules of Order.

I'm no expert on parliamentary practices, but I took a college class on it (mainly because the records office called and told me I was 3 hours short on an elective). I thought it would be an easy class. It was anything but easy. Not only did we have tests, we had to participate in mock proceedings, and everyone had to be the chair once. I still have one of the tests. Among the questions asked (they were all essay questions):

In what ways are main, subsidiary, incidental, and privileged motions alike? In what ways do they differ?

Are there conditions which permit a member to interrupt another member that has been assigned the floor and has commenced speaking? If so, list the conditions and explain.

Why can't the motion "to lay on the table" be reconsidered and why does it yield to privileged questions?

Motions to reconsider and to rescind both offer the group an opportunity to reverse former action. Explain the ways in which these motions differ.

If you were the presiding officer, how would you attempt to stop a small minority that was trying to interfere with the orderly transaction of business?

I made a "B" in Dr. Kiesling's class, and I was happy to have it. I never thought I'd need it... until I was a district superintendent. I got to preside over a potentially contentious church conference regarding a piece of property and the handling of a large foundation bequest. The congregation was made up of both town folks and a lot of large-operation farmers who had all participated in parliamentary procedure in their high school FFA clubs (and some were ready to play "stump the chump" with the chairperson - me). I was never more thankful for Dr. Kiesling's class, and I survived the day. If I'd been smart, I would have brought a parliamentarian with me as a consultant. What could it have hurt? The important thing wasn't me or being seen that I could or couldn't handle it; the important thing was getting it right. I had a little training, and a little luck. I could have prepared better.

We'll need all of the help we can get for this General Conference, as it will be like none other. In addition to our theological arguments and opinions, we'll need folks with expertise in presiding and in Robert's Rules. All of this will be rendered academic if things don't work.

Here's to hoping the logistics work. As my Irish friends would say (lifting a glass): Sláinte!