Repentance, Pathos, Humility - and the Luxury of Schism

When I was a pastor, Holy Week could be a very exhausting and emotional week. And like many pastors, in my efforts to be sure to plan worship, set atmospherics, and lead a congregation into the Passion and Triduum, I often did more planning and studying than I did actual worship and reflection myself. It is the blessing and liability of pastoral work.

This Holy Week has, literally, rocked my world. A couple of years ago, our episcopal area entered into a covenant with the East Mexico Conference about finding ways to work with each other beyond token measures. Of late, the Paris District of the Memphis Conference and the Manatiales District of the East Mexico Conference have been intentionally working together to find ways to help each other. The Manatiales District Superintendent brought a team up to the Paris District during Holy Week, and they came to the Paducah District Office/Campus on Wednesday. Our present office/campus was formerly a church that had to close due to lack of finances and membership, the result of a "split" within the congregation (more about the facilities can be read here). 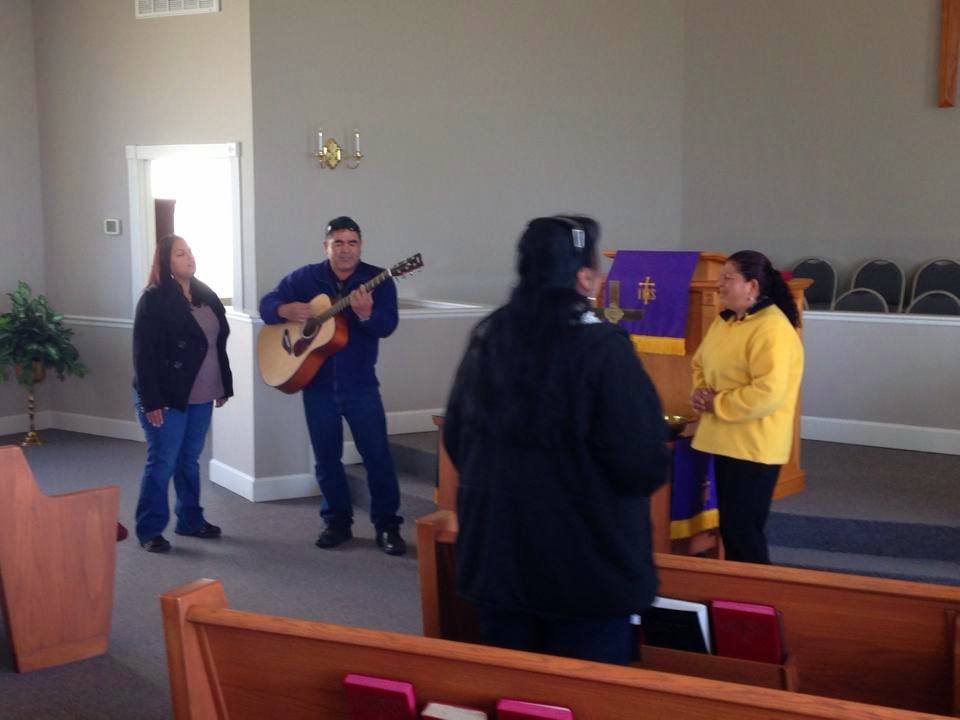 When our Mexican friends arrived at our district office, we met to talk about the Hispanic population in our area, which is almost all Mexican. Some work at nearby poultry processing plants, others work on large farms. After some conversation (with a translator), I took them on a tour of our facilities, which includes a church/sanctuary that is currently not being used (picture on left). As we went in, their eyes got wide. They asked if they could pray. One man brought a guitar in and they sang praise songs. And then some went into extemporaneous prayer. One woman, Sandra (in the foreground), was praying and weeping. My Spanish is close to nonexistent, but I was told she was asking God to forgive us for our not being faithful with this building, for whatever disagreement that lead to its closing. She didn't pray "them." Or "others." She prayed, "us." As if they shared in the sin of this particular church of being more driven by disagreement and pride than being driven by the Christ who was God Among Us. Our hope is to have someone from the Manatiales or Fronterizo districts (the sister districts of the Paris and Paducah Districts) come and serve this area's Mexican population.

I have never been more humbled in my life. Or felt more ashamed. We American United Methodists are a spoiled and narcissistic bunch, so busy labeling and calling each other names over the issue of same-gender wedding ceremonies, while our impoverished but faithful and hope-filled Mexican Methodists are weeping and repenting over the conflict of a small rural church that had to close and is now empty. They understand the "we" of Christianity a lot better than we do.

If we were a thriving denomination, amidst a thriving faithful nation, I think we could afford the luxury of debate about things such as same-sex wedding ceremonies, theories of the Atonement, the intricacies of the Incarnation, and the like. And I don't undervalue these things in a Wesleyan Ethos; indeed, I think they are important and defining for us as United Methodists. However, contrary to our present behavior we are not in a position for such luxurious arguments - indeed, we are at the point of unsustainability. If it were just about finances, that would be one thing. But we are looking at generativity - being survived. I have no doubt that God's Kingdom will survive. But I am one who believes that a Wesleyan ethos is one of the best expressions of the Faith, and our decline is happening on our watch. Do we REALLY want to be the people who could have sustained and grown the people called Methodists, but chose to seal the fate of being an impotent and dead sect instead? It is as if we are arguing over whose baby it is, and thinking the solution is to cut the baby in half - thus not only killing the baby but insuring that the baby won't one day have children of its own.

I would argue that until we make discipleship and mission the clear priorities of our denomination, the rest is just noise - a noisy gong or a clanging cymbal. And even that is just noisy to us United Methodists: we are making a lot of noise in a concrete room, but no one outside of the room hears much and could care less. Few outside hear what wonderful things the UMC is doing - and we are doing such good things! - because of all of the other noise.

We are emulating U.S. politics in our conflicts, name-calling, and demonization of "the other." Caucuses and factions in the UMC are advocating schism, disruption, and divestiture. Faithful folks of conviction that we disagree with are called names other than brother or sister. This is not what we should be proud of - this is what we should be repenting of, with humility and shame.

Personally, I am about as orthodox a United Methodist as you can get - not because of my office, but because of my conviction. I hold a traditional understanding of marriage and human sexuality, while maintaining a generous and gracious ministry to anyone and everyone. But that's the personal side. I'm also a part of the covenant community called United Methodist, and the religious order called Elder - willingly submissive to a body and covenants larger than myself. That means that my personal bent doesn't trump the larger covenant body.

Some say that the UMC is clearly wrong on the issue of same-gender marriage. Some say that we are clearly right. What's clear is that it's far from clear, and neither side is going to be convinced by any argument. We see at best through a glass darkly. We also have to live, as Reinhold Niebuhr said, in the tension of having and not having the truth. Our wisdom and intellect pales compared to the Almighty.

I'm weary of the name calling and more weary of the blood feud among United Methodists. More weary and ashamed that amidst all our efforts in this fight, we are more invested in fighting than discipleship and mission. A world outside of our United Methodist box is hungry for Jesus the Christ.

Because of these and other reasons, I have always embraced the via media above my own convictions because of the extremes in Catholicism and Protestantism and the horrible histories of the Great Schism and Reformation, in which much was lost, and the main losers were the people in the Middle, the sheep we are supposed to tend and feed. If history is any indicator, the middle way isn't the easiest way, fastest way, or the popular way - but it seems to be the most faithful way.

In this season, if we don't favor right practice over right belief - we are doomed to repeat the mistakes of the past and embrace the harsh reality that we are not generative anymore. Continuing to major in the minors will exact a church that is about something other than discipleship and mission. We will always live in a tension if we choose to live where two or more gathered, and indeed, God CALLS us to live in the tension. If we split as a denomination, you can't live in the tension - and, I would argue, are taking the easy way out.

Life is hard. Faith is hard. Discipleship and mission are hard. Getting a divorce as a denomination is just to admit it was too hard and we wanted out. Conservatives and progressives alike will have to decide what is an essential versus what is an idol. Our denomination has made same-gender marriages an idol - for it has become that which we are worshiping and putting all our bets for or against. I'm not saying it isn't an important issue. But it's not as important as making disciples and being in mission for world. To Christians, nothing is more important than that. Nothing. It's our Great Commission.

It's about making disciples. Going out in mission. And we need to repent of not doing that, especially this week of all weeks. My Mexican counterparts reminded me of that forcefully. It may be that in this season, United Methodists need to unite in repentance, humility, discipleship, and mission, rather than emulate politicians and principalities of this world, for we can always find that which divides us. I know I need to do and live these things in my own journey of faith. Can we do the harder work of finding what unites us?

God, forgive us. We don't know what we're doing.


I wrote this in a couple of circles in response to opinions voiced by both conservative and progressive voices in the United Methodist Church regarding schism. It is heartfelt and from my conviction. I pray it helps unite rather than divide.

On the issue of same-gender marriage... one side is not going to "convince" the other one - and shaming each other by using terms such as "homophobic" and "unscriptural", "discriminatory" and "permissive" is far from covenant behavior. Saying that "The Inquisition Cometh" is not helpful. Conservatives and Progressives alike in the UMC are using all kinds of language that is not acceptable in a covenant community. Both sides are threatening to withhold funds. To some, it seems like we'd rather cut the baby in half.

John Wesley and George Whitefield disagreed. And debated. Vehemently. They argued over grace. Predestination. Universal redemption. Wesley leaned toward the Arminian. Whitefield leaned toward Calvinism. And yet while they argued, and disagreed, and wrote back and forth - there was never a claim of discrimination, or being morally bankrupt, or the taking of cheap shots and denigration. They both labored to teach and preach, to take mission and discipleship to a world that was hungry and desperate for it (and still is). And when Whitefield died, Wesley - of all people - was asked to preach his funeral. And if you read that sermon, it is clear: Wesley loved Whitefield.

It disgusts me that the secular world reads little about the Methodists anymore except for this controversy (and I'm convinced, evil temptation) to schism, divest, disrupt, demonize, divide... instead of going to make disciples of Jesus Christ for a hurting world in need of healing. Not only is it sinful - it is a blood feud, as insular and dysfunctional as most blood feuds. It may be the greatest blow to our pride that if the UMC splits, falls apart, or disintegrates, that it will be with a whimper and not a bang. We won't be news long.

E.H. Sugden wrote this in his introduction about Wesley's funeral sermon for Whitefield and how the two men loved and respected each other: "Two opposing views represent the two sides of one truth, which our finite understanding is not able to synthesize; but which we may nevertheless accept, just as we accept the Unity in Trinity in the Godhead, or the divine-human person of our Lord." Or, to quote the more recent words of Reinhold Niebuhr, Christians must learn to live in the tension of having AND not having the truth.

These would be good things for all of us to remember before we go off thinking "we" are right and "they" are wrong. On this matter, I suspect we all share in ignorance and arrogance.
on April 08, 2014 No comments: