My beloved United Methodist Church finds itself at a "place" that many other Christian movements, denominations, etc., have found itself at sometime or another (or even before): where shall we draw the line? To be sure, Methodists are no strangers to this; we've split, come together, and merged before.

The church that I presently serve is an awesome, awesome church. It made the decision years ago to remain downtown rather than move to the suburbs, because we believe there is much to be done here. Our church also has much history to it: we were the host (and sponsor) of a new denomination starting - the Christian Methodist Episcopal Church. That came about from a question asked during the 1866 General Conference of the M.E. Church, South: "What shall be done to promote the religious interests of our colored members?" Four years later (December 16, 1870), forty-one former slave members met in the basement of the church I serve to start the CME Church. UMC and CME folks have told me that this is something to be proud of - and I am thankful for the generosity shown by our church members so many years ago. A state historical plaque in front of our church commemorates this piece of history. 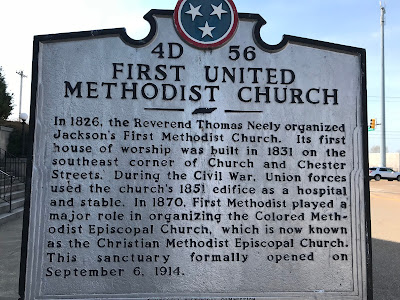 While there are things to celebrate about that, there are also terrible things to mourn. In the background of that plaque is our beautiful church building, with a painful reminder carved in stone below the pediment: 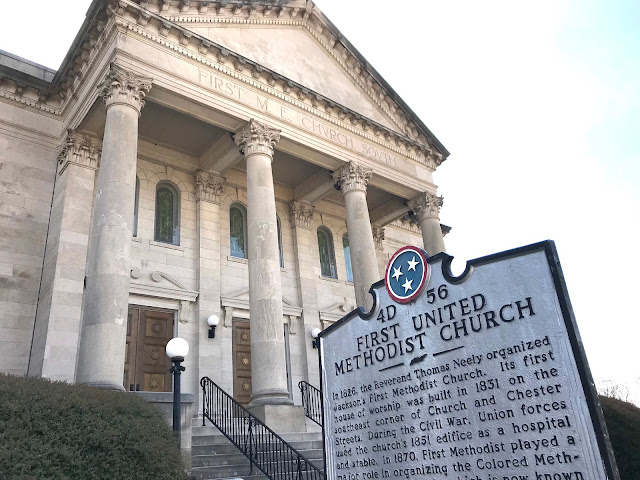 I see it every day. It is a painful reminder of our past - and a ever-present catalyst to get things right.

In the midst of our conflicts and talks of division in our denomination, some have said, "We are better together." Others have asked, "Are we really better together?" I think the real question, given time and history, is, "Are we any better than before?" And I don't mean the last fifty years.

Mandeanism. Gnosticism. Manicheanism. Arianism. The Filioque. Subtle and profound differences in theology and ecclesiology. Secular governance vs. theocracy. Clergy celibacy. Liturgical practices. Owning slaves. Birth control. Divorce. Female clergy. We Christians have evolved (or perhaps devolved) into what we are now by schism. In all of these issues across two millennia, all "sides" have argued that their positions are the correct, faithful, true, and "only" way. Each side (and there are always more than two) will argue that to do or change anything about that (whatever "that" is) is a compromise that people cannot in good conscience make. Sincerity and conviction are present on all of these sides.

In the midst of this I believe that one word needs to be stricken from our Protestant vocabulary: orthodox. I once applied it to myself as an "Orthodox Wesleyan," but I now realize that any Protestant using the word "orthodox" is - at best - using a bastardized definition of the term. Orthodox as compared to what? Catholics? Coptics? Eastern Orthodox? Early Reformed? Lutheran?

And when it comes to the current "hot topic," sexuality, what exactly is orthodox? The apostle Paul thought that the End was near, and shared with the church at Corinth that it's probably best "for a man not to touch a woman," but conceded that marriage might be better for some people. The Eastern Church allowed their clergy to marry, while the Western Church didn't... until the Reformation, in which Protestants (at first reluctantly) permitted clergy to marry. Later, in Protestant circles, singleness was viewed with suspicion (regardless of whether you were clergy or laity). Having children was encouraged ("be fruitful and multiply"), and in Protestant and Catholic circles alike birth control was neither discussed nor upheld by doctrine or precept, seen as in contradiction with Natural Law and the procreative purpose of marriage and sexuality.

It wasn't until 1930 when the Anglican Communion decided (after much debate) to adopt a statement on birth control, that any Protestant entity had ever considered to remove procreation as the main component of marriage and sexuality: the statement read that birth control was permissible "when there is a clearly felt moral obligation to limit or avoid parenthood and when there is a morally sound reason for avoiding complete abstinence." After that, laws were (slowly) changed that had previously prohibited any type of contraceptive education or the sales of any contraceptives. Seventy years later,  in 2004, Al Mohler of the Southern Baptist Convention stated that, "Evangelical couples may, at times, choose to use contraceptives in order to plan their families and enjoy the pleasures of the marital bed." Whoa!

That is a far cry from the sexual ethic that prevailed for a long time in Protestantism, and still prevails in Catholicism: marriage, and the gift of sexuality, was created for procreation. I could go into a similar discussion about divorce, too: how did we evolve to the point where divorce became permissible? How many divorces can you get until it's wrong?

To me, the question is less about the Church getting it right about just homosexuality, and more about having a faithful ethic of marriage and sexuality, period. What's orthodox? Who's right? Did Protestants leave the Catholic Church to suit themselves, or to be faithful? Did we change from marriage and sexuality being about procreation to "enjoy the pleasures of the marital bed" to suit ourselves, or to be faithful? Did we go from disallowing divorce to allowing divorce because of tragic situations to suit ourselves, or to be faithful? I think those are questions we'd rather not delve into... or we might find that our present arguments regarding sexuality might not hold water.

I have no easy answer to the latest challenge of the Church regarding sexuality. Quite frankly I'd rather get up and fight for the cause of discipleship and the lack of it we seem to have across our denomination. But this issue is not going to go away. For some folks, this has become a "Here I stand, I can do no other" moment... in which I find some irony. Martin Luther gave us the model to challenge orthodoxy and dogma. As one learned colleague of mine said, "Luther was right on some things... and he was wrong on some things." Depending on who you ask, anyway.

What I do know is that the scriptural and theological reasons we once gave before regarding sexuality and God's creation (i.e., being single being preferable, and being married for procreative purposes) seem to no longer apply. I think it will take us a long, long time to get all of this "right." I find little comfort in knowing that it took over 300 years for the church to formulate the Nicene and Apostles' Creeds, and less comfort in knowing that even they led to schisms great and small.

I do wish we could be more patient and tolerant of each other. It seems the height of hubris to think that we as a United Methodist Church can get this right within 50 years. I am sure that people were convinced they were right 173 years ago, when in May of 1845 annual conferences throughout the South sent delegates to Louisville, Kentucky, where they formed the Methodist Episcopal Church, South. Some folks were so convinced that they even carved those words in stone...

Are we really any better than we were 150 years ago? 200 years? 500 years? 1000 years? I am thankful that God is patient with us, because we are certainly not a patient people.