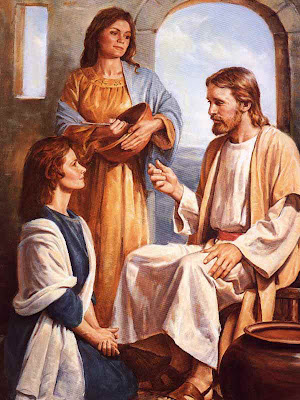 Now as they went on their way, he entered a certain village, where a woman named Martha welcomed him into her home. She had a sister named Mary, who sat at the Lord's feet and listened to what he was saying. But Martha was distracted by her many tasks; so she came to him and asked, “Lord, do you not care that my sister has left me to do all the work by myself? Tell her then to help me.” But the Lord answered her, “Martha, Martha, you are worried and distracted by many things; there is need of only one thing. Mary has chosen the better part, which will not be taken away from her.” - Luke 10:38-42, NRSV

My freshman year as a district superintendent in the Southeastern Jurisdiction came to a close last week as I attended the Cabinet Consultation at Epworth by the Sea in St. Simon's Island, Georgia. Along with meeting episcopal candidates for this year's jurisdictional conference, we were able to hear from Gil Rendle. His presentations, along with the resulting discussions, have fermented in me ever since.

As I have written before, we are living out the Chinese curse of "living in interesting times." And as I prepare to be involved in another round of pastoral appointment-making, I think some very hard realizations are going to hit us as a denomination. If we are going to make the shift to be about making disciples instead of making church members, there are people who are not going to be happy. In discipleship mode, neither clergy nor congregations are"cared for" - we become resources. Maybe even expendable resources.

Think about it: if we are truly going to ask people to vote against their self-interests and instead to devote themselves to a bigger purpose beyond themselves, we ARE saying that we are expendable. That our best interests ARE secondary (or even tertiary) to the interests of the Gospel of Jesus Christ. In short, as Rendle challenged some of us last week, do we want an encounter with Christ, do we want to experience His grace, and do we want to transform the world more than propel our self-interests?

Some church members and clergy may say, "I didn't sign up for this gig." And, in all honesty, it hasn't always been the gig that was presented.

What is needed from our clergy? I think we have to retool, renew, and be willing to be transformed - not into what we want to be, but into what God wants us to be. Some of that may not be what we thought ministry ought to be, or that it's "not me" or "against my nature." The reality is, while all of us have gifts differing according to what God gives us, we are also called to be generalists.

In baseball, we call such players "utility" players; St. Louis Cardinals' coach Jose Oquendo comes to mind. I remember my father and I watching the Cardinals play the Braves in a 19 inning marathon when Oquendo pitched 3 innings - and held the Braves scoreless! - before giving up two runs in the 19th inning. Oquendo played every position on the diamond, has coached, and managed a year in the minor leagues. Now, one certainly can't excel in all things - but I think we pastors have to be willing to do more than just those things we think we "excel" at. We have to be generalists. We are servants. We are expendable resources. As we venture out into the wilderness, there are some harsh realities to face. Guaranteed appointments and defined-benefit pensions may be endangered species. "Moving up" every time we make a pastoral move may no longer be a given. We will experience loss in many shapes and forms.

Laity are no less immune. Restructuring church, changing the focus from membership to discipleship, emphasizing mission over maintenance - this may mean more than just giving up our favorite pew to sit in. We might lose our church office positions. We might be called to put more money in the plate yet have less say about how we want things. If legacy and transforming the world in the name of Jesus is the most important thing, we will pass the mantle of leadership in our churches into the hands of those who might not do church the way we would do it. We will experience loss in many shapes and forms.

Yet in all of this, once again the bigger question we need to ask ourselves is this: Are we willing to give up our self-interests toward the bigger purpose of making disciples of Jesus Christ? Can we take up the cross? Can we pay the price? Can we choose the better part? Are we willing to examine ourselves?

Those are things worth praying about.