As I shared in the district clergy meeting on Tuesday, keeping up with metrics in Vital Congregations is not antithetical to making disciples of Jesus Christ: metrics are an important tool. It’s taking the pulse of your congregation. It gives you a baseline to see where you are and where you might/might not be going. In the task of making disciples, however, we have got to move from our current understanding of membership toward a biblical and spiritual model of discipleship. In United Methodist circles, this means (to borrow from Gil Rendle): 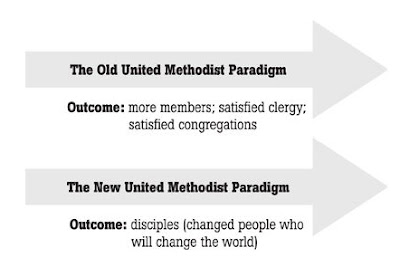 If we're about institutional survival, we probably deserve to die. But if we believe making disciples of Jesus Christ for the transformation of the world is our mission - and that this is the most sacred thing we can do - we'll be all about that! And we certainly need to keep asking ourselves how we might measure discipleship and making disciples. How do we measure the difference made as a person moves toward becoming a disciple? Asking that question will help us get toward the task at hand!

So with that being said, I'm going to rip off Joey Reed's blog, "I'm Done 'Growing the Church,'" as this gets to the heart of the matter.

Enjoy. Or be irritated. Or both. Just be forewarned that while some people might not like this message, others are desperate to hear it.

No more outreach strategies to fill the pews. No more ideas to draw young people. No more switching out the hard stuff for lighter fare in hopes that we will appeal to a larger audience.

No more “growing the church.”

It seems that every time I sit down to think of ways to lead people to Jesus, I find a new way to “align a program” or “bring focus to an issue” — or worse, I find good people who mistakenly think that my job is to be a chaplain, or just their “professional visitor.” Gotta get those visitors to close the deal and join up.

So. No more just “growing the church.”

Unless. Unless you mean something different when you say, “Grow, Church.”

Perhaps you mean, “Growing in Grace.” Perhaps the church is learning to become more mature about forgiveness. Maybe that would mean that the churches in the USA would be more willing to reach across boundaries of age, race, gender, and politics (yeah, I said it) in order to develop real relationships.

I would love to grow that church.

Maybe you mean, “Growing in Love.” That could mean that the church is learning to become more selfless. That could turn into giving our time and our money to help people who are in a bad way — even people we don’t think really deserve it.

I could see myself growing a cool church like that.

I would give my right arm to grow that church.

What do you mean when you say, “Grow the church?” Because if you are looking for growth strategies that capitalize on market demographics and creative sales pitches, I’m probably busy that day you want to talk.

What do you mean when you say, “Grow the church?” Because if you are trying to find ways to impress kids, add some flash to your worship, and pray that they will give enough to pay for the brand new $2.3 million, 2500 seat worship center, I’ve got another appointment to keep.

But if you mean that you are interested in growing disciples into deeply committed Christians, let me invite you to pull up a chair, stop pulling out your hair, give up on pulling up your own bootstraps, and let’s get down to brass tacks. 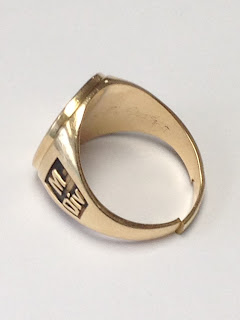 One Lent a few years ago, I publicly confessed to the sin of pride. Someone afterwards told me, "You just said that to get conversation started. You aren't prideful at all." And while I don't color my hair (or beard), drive older cars, and am not very materialistic, I nonetheless have often been guilty of pride. In my case, clergy pride.

A few months ago, something pinched one of my right fingers. Hard. It was my seminary class ring, and it was cracked. It took a lot of soap and tugging to get it off my finger. The jeweler called it a "cracked ring shank," and it is not uncommon among arthritis sufferers like myself whose joints and extremities often swell and contract several times a day.

Getting the ring replaced or fixed is not a big deal; it has a lifetime warranty. And it ought to: it cost a pretty penny when I got it (around $450 in 1990), and it was my birthday/graduation/Christmas present one year from my wife. I stared at it for a long time after I got it off my finger, and realized that I have been rather prideful about my education and ordination. That beautiful ring with my seminary's crest told the world that I had a theological education from a fairly prestigious school. Maybe I was wearing it for the wrong reasons. 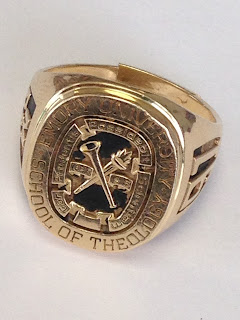 So for the time being, my ring is still cracked and at home on my dresser. My diplomas from Tennessee and Emory are framed and in a closet. And while I am not ashamed of my ordination as a deacon and an elder (yes United Methodists, I am that old to have been ordained both), I have to remember that my ordination to ministry began at my baptism. They are gifts from God and the Church. I have NOT arrived - even if I am a district superintendent. God expects me to use these gifts, but He's not impressed.

I've been a district superintendent long enough to realize that the divide between clergy and laity is way too wide - and worse, the divides among clergy are just as wide. United Methodists have 26 types of "conference relationships" - distinctions that mean something to the Board of Pensions, Board of Ordained Ministry, and insurance companies - but mean very little to people in the pews (or, for that matter, those outside the pews). A friend of mine has continually noted that our "tiered" clergy system is nothing short of classist and perpetuates an evil just as bad as racism. Anyone appointed to the work of what elders and deacons traditionally does by the power of the Holy Spirit should be ordained and be given God-given (not institution-given) authority to do their work, regardless of their education. All the implications of itineration, insurance, conference relationship, etc. are matters for the institution to figure out. I'm not slamming the institution - heck, I AM a big part of it - but let's put it in its place.

(Just a historical note: Methodists used to ordain local pastors as "local elders" who did not itinerate and whose ministerial function, just like local pastors, was limited to the parish they were appointed to. And then we quit ordaining folks who weren't full connection. And then we started consecrating communion elements over the phone. And then we licensed local pastors to have local sacramental authority. And yes... we are stupid, inconsistent, and guilty of clericalism on this issue).

Those of us clergy who are "full connection" members aren't better than others because of our status; quite the contrary, we are supposed to be mentoring, leading, and guiding those pastors who for various reasons are not "full connection." To those who have been given much, much is required!

We also have to realize that, practically and ecclesially, local pastors and supply pastors are the elder-in-practice for their local church and parish. Our benefit of seminary education is a tool, but not an end-all. It is certainly no indicator of effectiveness or qualification - if it were, the UMC would be bursting at the seams instead of in decline.

Leadership has to be shared. Leadership has to be encultured. Laity are called no less than clergy toward ministry in the Church, and indeed may do it even better than clergy. A very wise pastor once told me that being the pastor and spiritual leader of a church meant that sometimes, a lot of education and leadership is needed at a church and one has to be proactive in guiding a church toward vitality. At other times, a church might have very gifted leaders and spiritual depth among its laity, and you have to be secure and big enough to get out of their way. Both require maturity, humility, and spiritual discernment to know the difference. We clergy, too often, sometimes think more highly of ourselves than we ought to think.

Our district recently had our first "Generative Leadership Academy." Around 160 laity and clergy met to begin to talk about and dig into what it means to be a leader and how to "reproduce" leadership and discipleship in our churches and communities. We have begun the work to see that God is asking lay and clergy to partner together in leadership. That's the direction we need to be headed.

Our theology of ordination can be rather fuzzy, and our understanding of clerical function can be fuzzier still. But our theology of baptism is extremely clear: every baptized Christian is a minister, an ambassador of Jesus Christ, doing priestly work in His name. Being baptized is being set apart from the world to be disciples, and make disciples, of Jesus Christ. For this season, especially for us ordained clergy, that may need to be our emphasis instead of our ordination and educational credentials. They are tools for ministry, but not the end all. "Therefore, confess your sins to each other and pray for each other so that you may be healed. The prayer of a righteous person is powerful and effective." (James 5:16)

More to come where baptism, church membership, and making disciples are concerned. Today, I confess clergy pride - and God forgive me for such.