Redux: Tubby Smith, Billy Donavan, and Thinking Outside the Paint 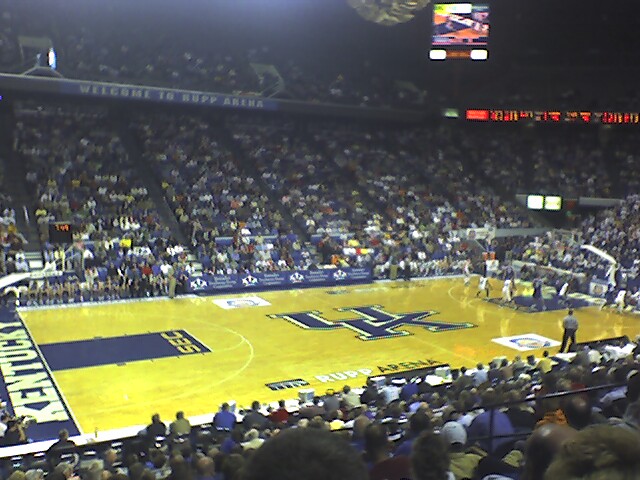 Note: Since Billy Clyde is out, I thought I would reprint this blog from two years ago just for the heck of it. If John Calipari does indeed take the job, I thought he might need to be ready for the worst.

Having just returned from the Kentucky Boys Sweet 16 High School Tournament, and having watched college tournament action on television all week, I have to admit that basketball is on the brain. We all sit in the same seats every year (the picture shows my view; great seats!). Every morning I get there a little early, drink my coffee, and read the newspapers. I read a book review in the Lexington Herald-Leader that caught my eye last Thursday: “Hoops Philosophy: Knight Morally Above Wooden?”

Bobby Knight? The General? When he was at Indiana, didn't he throw a chair once when they were playing Purdue?

Don’t laugh. While Adolph Rupp and John Wooden are certainly kings, they weren’t always known for playing by the rules. They were wizards with the magnificent players they always got. Knight, on the other hand, made a lot of players. His players performed academically. He didn’t play favorites. Overall, Knight may not be the bad guy we portrayed him to be.

Back to the High School Sweet Sixteen. While in Rupp Arena one afternoon, I noticed all of the sudden that the press were frantically typing on their computers and people’s cell phones were going off all over the place. I initially thought that perhaps a tornado was headed toward downtown Lexington, or that our country was under attack. I was close: Tubby Smith was leaving the University of Kentucky (UK) to coach at Minnesota.

What about Tubby Smith? I’ve lived in Kentucky on and off for 7-10 years. I’ve never heard anything poor about his character. The Tubby-bashers say that he can’t recruit. Possibly. But while at UK, he won over 20 games every season (won over 30 games in two seasons). Won a national championship. Went to the Sweet Sixteen five (5) times. Swept every national coach of the year award in 2003 (only he and Bobby Knight have done that), after going undefeated in the SEC. Oh, they won the conference three years, too. And in the midst all of that, he was also a gentleman and a scholar.

Does that count? Not at the University of Kentucky. Tubby is gone. What are the qualifications?

• You need to be perfect. Damned perfect. Perfect as an Alabama football coach.
• Don’t be a nice guy or moral influence. You’ve gotta be cutthroat.

Mark Story of the Lexington Herald-Leader was more blunt: UK’s coach needs to be an all-consumed Type A personality. A guy with an unyielding commitment to the bottom line and little else. A tyrant. Sometimes a jerk. In fact, here is the job search he put in the paper:


Wanted: Head men's basketball coach, University of Kentucky. Must employ up-tempo style of play. Must recruit with a relentless fervor. Must consistently beat Louisville, Indiana, North Carolina, Florida, Tennessee and everyone else. Consistent Final Four appearances mandatory. One final requirement: It helps to be a jerk. – from “The Meek Should Not Inherit the UK Job”, 3/25/07, the Lexington Herald-Leader (the whole article is here.)


Since Adolph Rupp is dead, and John Wooden is 96, who can UK get that is perfect? A lot of folks are submitting Billy Donavan's name from the University of Florida. Some have said Tom Izzo. A few have said Travis Ford. Well, what about these guys?

Jesus Christ? I think the man from Nazareth has kept up with basketball, and would be a darned good coach. But Jesus was always slow to offend, and a slow offense won’t work with Kentucky fans. Nope, Jesus is out.

The Apostle Paul? He is immediately disqualified; in his letter to the Romans (chapter 7), he remarked that the holiest of our actions, even the holiest of the actions of the holiest saints, are still full of imperfections and defects. We may be saved by grace through faith, but that’s not perfect enough for UK fans.

Peter? Too fickle, and don’t forget that he jumped ship. Would remind folks of Rick Pitino too much.

John the Baptist? HEY! There’s an idea. Brash, loud, demanding, unrelenting. I think he’s the one.

The head-on-a-platter experience will serve him well.

Well, well, it seems the "Great Rev'd Sky has shown his true colors. Well, he's at least proven that no matter how much you "claim" to be a KY fan, if your not from here, you just don't get it...and he ain't from here.

So, in defense of our great basketball state (and the fans he so eloquintly frowns upon) I will speak up. Let's review his list of "possible" coaches to fill Tubby's shoes.

JESUS CHRIST - Ahhh, could be the man for the job. After all...he IS perfect. So, we can only assume that he'd make NO coaching OR recruiting mistakes. I believe he's proven that too. After all, he did recruit one heck of a team to hold the sole responsibilty of passing the good news on to the ENTIRE WORLD. And yeah, these guys were rough around the ages, and maybe NOT the best at each position, but what Christ did was form TEAM CHEMISTRY. Something UK fans have frowned on Tubby for for years. Yup, Jesus would do just fine.

PAUL - Now hears a guy who had it together. Would be an OUTSTANDING choice for a coach. He was intelligent and always had a game plan. That's debatable with Tubby. No one doubts that Tubby knew how to coach a good defense, but any one who's ever watched a UK game during the Tubby area knows that our offensive game plan was like watching someone try to catch a greased chicken. So this definately gives Pual and edge. Paul shows us his offensive game plan in his letter to the Ephesians when he speaks of putting on the full armor of God. Clearly, he's ready for his competetion. That show a good offense. He knows his opponents so well that he can become like them if necessary (1 Cor. 9:22) If you know your opponent so well as to mimic them, that shows you know how to defend them. That's a good defense. Yup, UK fans would certainly appreciate someone who could coach both ends of the court.

PETER - Not as out as you might think. Yes, he did screw up and deny Jesus. But, he admitted his mistake. Immediately he knew the wrong he'd done and seeked for forgiveness. He also lived the rest of his life striving for perfection. So much so that he wouldn't even allow himself to be crucified the same way as his Savior. That's a man willing to make up for his mistakes. In regards to Tubby, the Saul Smith years are all I need to say. Peter would do just fine. Admitting where we fail only makes us better in the end. I'm not sure us UK fans felt as if we were ever getting better.

JOHN THE BAPTIST - All I can say is...you're right. He'd do well for the exact reasons you said. Even the head on the platter remark is appropriate. Oh, one other reason he'd do a good job...he knew he's place. When Jesus walked up to be baptized, John new he wasn't the big dog on campus, Jesus was. Just becuase your related to the king doesn't mean you ARE the king. Kind of like, just cause you win umpteen awards for coach of the year doesn't actually MAKE you the best coach...in any year.

Well, that's the way I see it. But, that might just be the optimism of a young man versus the pessimism of an old man. But, no matter which way you really see it, UK was ready for change, and that's just the facts.

Take it from an old fan who IS from here and has a diploma from UK. UK fans are unrealistic nuts and you can't win every game. Rupp is a church and the fans in it act about as good as "good" church members. Of course people that aren't from here don't get it, incest is wrong.

Hell we named the place after Adolph Rupp, but I remember when we were ready to throw him out on his butt too. Tubby was a class act by moving before we fired him, spareing us looking even worse than we are already looked upon nationally.

Our great basketball state is losing ground to Texas, Florida, Georgia, Tennessee, and Illinois in high school recruits. Who comes to the Marshall Co. Hoopfest? Not the big KY schools! Oak Hill Academy. Chicago Simeon. And when Kentucky does have a few outstanding high school players, they inevitably go somewhere else. Who blames them? We have become the New York Yankees of college basketball.

Love the team. Hate the coach. We gotta blame someone. Lord knows it couldn't be OUR fault!

yes tubby did all that while he was here, but you also have to look at this, the national title he won, he won with pitino's players and in his ten year tenor at UK he has consistently gotten worse, this is the first year, UK was not ranked in at least the top 15 in the nation since 1990, I am not saying tubby is a bad person, but it was time for him to leave, bring on billy d. baby!!!

COME ON BILLY D YOU ARE THE BEST PITINO WAS GOOD BUT YOU ROCK. NO OFFENSE TO TUBBY BUT HE DID NOT BLEED BLUE.. WE NEED SOMEONE LIKE BILLY TO GET KY BACK WHERE IT BELONGS AT LEAST THE FINAL 4 SO BRING IT ON TO THE BLUEGRASS YOU HAVE BEEN HERE BEFORE BUT NOT THE WAY YOU COULD BE HERE NOW. YOU ROCK

I, too, am not from Kentucky, but Sky, this is pretty sound analysis. A great post, all around. The comments from your KY commenters are cracking me up.

I will just share this: Just today, my office director and I were discussing the KY coaching job and whether Donovan would take it. We both agreed that he might, but also that, "You'd have to be crazy to do that job. It's just like coaching football at Alabama."

What is it with you idiots who keep going on about Tubby winning with Pitino's players.If you would pop your racist heads out of your butts you would realize that Pitino had all those players that Tubby won with plus Mercer, Anderson,Epps,,Prickett,and others and couldn't win the year before. Not to mention the fact that Tubby out coached Pitino in almost every meeting while at Georgia and Kentucky. Face it when you have nothing but hate and ridicule for a man of Tubby Smiths stature both on and off the court your problem far exceeds basketball at Kentucky and moves into hating the fact that an african american sat where that racist bastard Adolph Rupp sat. Your a RACIST!!!!