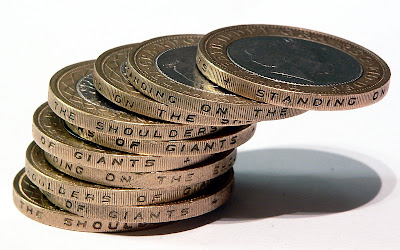 My Latin is awful, but the above phrase means, "Dwarfs Standing on the Shoulders of Giants." (Latin doesn't have articles; fill in with the appropriate definite or indefinite article). It is a phrase I briefly remember from college, and became better acquainted with from my friend Johnny Jeffords. My brief time in Britain last year brought it home even more. For one, the phrase is written on the edge of the £2 coin. And for another, I went to places that allowed me to see where folks who have been formative in my life have walked, where, sometimes, they literally stood on the shoulders of others. 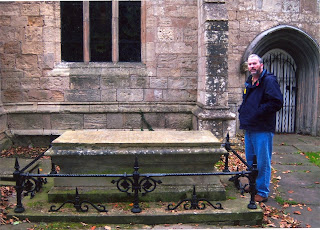 One was seeing the church where John Wesley grew up, where his father served as rector, and where, forbidden to preach inside his own home church, preached instead while standing on top of his father's grave (which was family property). Literally, standing on the shoulders of his father and legacy.

The other was going to the Eagle and Child pub in Oxford. This is where C.S. Lewis, Tolkien, and a few other notable writers used to hang out for discussion and an occasional pint. I actually got to sit down in the same corner where they gathered (that's Rick Dye, my D.S., with me in the picture below at the Eagle and Child). Lewis' writings helped me in discerning my call to the ordained ministry. Tolkien gave me a love of reading and writing that continues to this day, and also influenced my faith in ways that go beyond description. 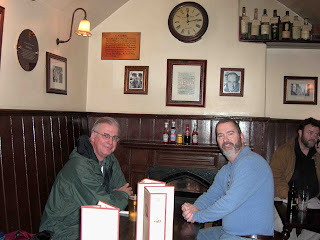 Why all of these thoughts? I find myself in the midst of lots of funerals: family, friends, parishioners. I always use these opportunities to talk about legacy, the Communion of the Saints, and how we stand on the shoulders of the giants who have gone before us. Even folks who were barely 5 feet tall.

As a society, we're losing touch with our extended families. We have become increasingly mobile and have run greater risks of not appreciating history, community life, and faith communities. Maybe I just need to remind myself of where I've come from so that I will know where I am going.

Thanks for indulging me.

Hey Sky, I was on a Wesley tour in 2005 with the ordinands of N. Georgia. Incredible places -- stood where you were there at St. Andrew at Samuel Wesley's grave. Thanks for writing and reminding us to remember these places and people. Peace -- Adam