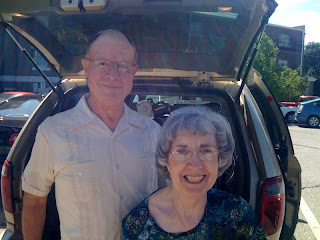 On Sunday, I decided to go to church at Pittsburg (KS) FUMC. Pittsburg is where both my mom and dad went to college (Pittsburg State... the only school I've ever heard of with a gorilla as their mascot!). I went to the 9 AM service, and as I pulled into the parking lot a van pulled next to my car... and my cousins John and Carol Schifferdecker walked out. So I had familiar faces to sit with at church. 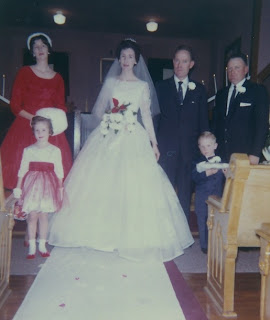 The summer sermons at Pittsburg FUMC are dealing with their history - where they came from and where they are going. As the pastor talked about the origins of their church, I learned that they were originally an extension of the Mulberry parish 100 years ago. Now Mulberry doesn't show up on many maps, but my mother's side of the family came from Mulberry - many of them still living there. My ears pricked up because Mulberry UMC is where my parents got married on Christmas Eve in the very early 1960's. The picture shows the happy couple (Midwesterners don't smile in pictures, I have found), along with my Aunt Bev and Uncle Ed, who served as maid of honor and best man. I think my cousins Maricia (Houghton) Stafford and Mark Lehman are ring bearers (I thought wrong - that's KIM Houghton in the picture, NOT Maricia! Good catch, Maricia!! Maricia was the flower girl at John and Carol Schifferdecker's wedding though.). Not pictured in this photo but at the wedding was Carol Schifferdecker (mentioned above), my mom's cousin and good friend who played the organ at the wedding. John and Carol came all the way down to Tennessee nine years ago when my mother died. I am blessed with wonderful family and roots.
It gets better - a mission team from Pittsburg FUMC went to Appalachian Service Project a few weeks ago... and lodged here in Paducah at Trinity UMC on their way to East Tennessee. You just can't make this stuff up! How cool is that? 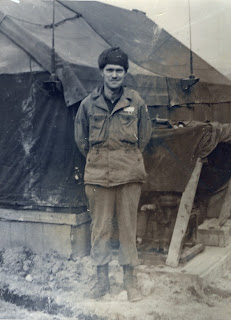 This is a picture of my father next to a communication tent while serving in the Army during the Korean War. Dad came back safe and sound. My Uncle Dewey served as a stateside mechanic during World War II, and also came home. However, my Uncle Howard, whom I never met, never came back from World War II, M.I.A. to this day and a horrible mystery to my family, worse than an itch that cannot be scratched. Uncle Ed was the last to see him alive, and I am sure that memory haunts him to this day. McCrackens were no stranger to death and could accept death; a baby daughter of my grandparents, Beth, lived only a few days. As my Dad once said, having a funeral and a casket or urn gives us closure; an M.I.A. loved one, though, remains an unfinished chapter at best. 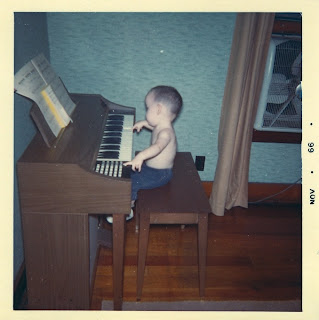 Here are pictures of a very young Sky McCracken sitting at an organ in our house, and a picture of my father as a baby being held by my grandmother. Both remind me of beginnings and where I have come from - and how important legacy is. 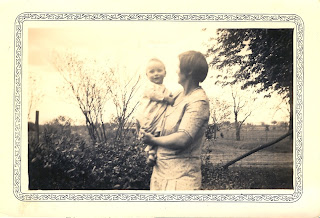