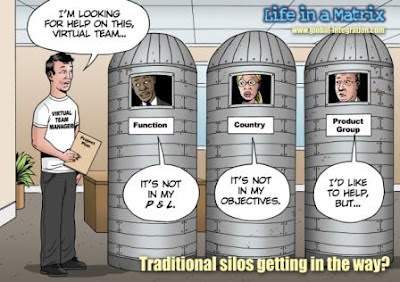 Silo Mentality: An attitude found in some organizations that occurs when several departments or groups do not want to share information or knowledge with other individuals in the same company. A silo mentality reduces efficiency and can be a contributing factor to a failing corporate culture. (definition from investopedia.com)

I am not a fan of silo mentality, and in fairness, Jim Winkler (General Secretary of the General Board of Church & Society of the UMC) wrote an article a few months ago how some United Methodist's have used the word "silo" as code for a "good guy courageously standing up against the big, bad general agencies of the denomination." While I disagree with that characterization, I do agree with a statement he makes at the end of his article: "...let’s admit that The United Methodist Church doesn’t have silos only at the general church level. We have more than 40,000 silos sprinkled across Africa, Europe, the Philippines and the United States."

If we boil these things down to a conference, district, and local church level, we find silos everywhere: at a conference level, we have board of ministry silos and cabinet silos. We tell each other that boards of ministry credential pastors, and cabinets appoint them, and the twain shall never meet, and do so (or rather, don't) under the guise of accountability and check-and-balance. Now that sounds good on paper (it's in the Book of Discipline!), and it's probably a good way to run government. We preachers learned in seminary or course of study that our church polity is set up like our government: we have an executive branch (bishops), a legislative branch (the General Conference), and a judicial branch (the Judicial Council). My question is this: is this the way to make disciples of Jesus Christ for the transformation of the world? I think if we were honest, we've been less about accountability and more about distrust. Hence, a silo mentality: you do your thing, and we'll do our thing, and not let the left hand know what the right hand is doing.

At a conference level, it goes beyond cabinets and boards of ministry: Connectional ministry teams/conference council offices, United Methodist Women & Men, conference camping ministries, conference trustees, campus ministries, conference agencies and committees. At the local church level: trustees, Sunday School classes, UMW circles, PPR committees, cemetery committees, finance committees... you get the idea. Again, if we are not careful, silo mentality will trump making disciples of Jesus Christ for the transformation of the world, every time. All of our structures look good on paper, but without prayer, sacrifice, and a servant-mentality, they lend themselves to become silos among silos.

What a negative image! And how obtuse of us to think that we are better by distancing ourselves from each other instead of working together! It's certainly not a biblical nor traditional model of life and servanthood in the Kingdom.

Enough of the negative - what about the positive? What about the genius of Methodism - being connected! Being connected in Spirit, being connected in structure, being connected and united in purpose and being! We have one of the greatest methods of being Christ for the world and making disciples, but we superimpose our individualism and need to "protect our own turf" over our connection, and by doing so we get the results that logic would expect us to get: silos instead of tables. Fences instead of bridges. Fenced-in backyard decks instead of open front porches. When we're not set up to foster relationships and work with each other, we'll become insular and intolerant instead of the community-oriented and collaborative disciples Christ taught us to be.

This year, the district I serve is doing individual charge conferences as opposed to cluster or a district-wide charge conference. What I am rediscovering is that the United Methodist Church is ignoring one of its greatest resources: the people who make up our churches, ordained by their baptisms and gifted by our Lord with talent and ability beyond our imaginations. We are a rich Church, and yet if we are not willing to be changed we will bankrupt ourselves into a structure that is not only lifeless, but unsustainable.


“Teacher,” said John, “we saw someone driving out demons in your name and we told him to stop, because he was not one of us.” “Do not stop him,” Jesus said. “For no one who does a miracle in my name can in the next moment say anything bad about me, for whoever is not against us is for us. Truly I tell you, anyone who gives you a cup of water in my name because you belong to the Messiah will certainly not lose their reward.

“If anyone causes one of these little ones—those who believe in me—to stumble, it would be better for them if a large millstone were hung around their neck and they were thrown into the sea." - Mark 9:38-42 (NIV)

We're all on the same team! Cabinets and boards of ministry, UMW's and Sunday School classes, trustees and youth fellowships, laity and clergy, General Boards and local churches. Whoever is not against us is for us, and we are a gifted and talented bunch: ordained by our baptisms, and sent forth to make disciples. That's not just a good idea, it's our mission and mandate.

Reprinting this one on UM Insight. Get ready for backlash -- uh, I mean, feedback. Blessings, Sr. Cynthia

I would like permission to use a modified version of your silo image on my blog (http://blog.sclcr.com/) to comment on academic silos.

Jim - you're certainly welcome to use the image... But I think *I* found it floating around somewhere myself!