My brother Johnny Jeffords' recent blog reminds me not just of the ties that bind, but the memories of that which have formed my faith. It's no mistake that music provokes the most of those memories.

I don't go to many concerts these days - the folks I'd want to see are expensive tickets to score and usually a long drive away. But last weekend my wife and I, along with her sister and brother-in-law, went to see Deep Purple at the Ryman Auditorium. It was a GREAT concert. Ian Gillan's voice is still awesome, Ian Paice hasn't lost a beat as drummer, and while I mourn over Ritchie Blackmore's leaving, Steve Morse is certainly no slouch of a guitarist. Don Airey took over keyboards when Jon Lord retired and I love that old Hammond-organ-with-a-Leslie-speaker sound. These guys are in their 60's, and still getting it done. I got my money's worth. Moreover, I got to hear Jesus sing. 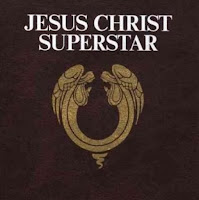 No, I'm not equating Ian Gillan to Jesus in a rock star sort of way; Ian Gillan sang the part of Jesus in Jesus Christ Superstar. NOT the movie, but the original recording with some of the best musicians in the world playing rock instruments as well as classical symphonic instruments, with Andrew Lloyd Webber (21 years old) and Tim Rice (25 years old) writing the music and lyrics. It was truly a rock opera, and I probably learned as much about the Gospel playing those albums over, and over, and over as I did reading the bible. My dad had bought the two-album set amidst Southern boycotting of it (in fact, probably bought it BECAUSE of that), and told me not to play them when I had friends over: "We wouldn't want to get them into trouble." While I could probably sing the whole album without any lyrics in front of me, the songs I remember most are "Judas' Death" and "Trial Before Pilate." Judas' frustration, Pilate's words to Jesus, hearing the crowd yell "Crucify him!," hearing the thirty-nine lashes; it certainly wasn't described - much less sung & played - the way I heard it in Sunday school. The music made it real. I can still hear those lashes (you can hear these two songs clicking here).

So while watching Deep Purple last Sunday night certainly brought back great memories of growing up, it also reminded me of my wearing out those two albums listening to Jesus Christ Superstar. While the memories are sharp, some things have changed: Jesus - that is, Ian Gillan - has his hair cut as short as mine now. And I think about other music that has shaped me: classical music from Bach, Brahms, and Beethoven, to the classic rock of Beatles, Boston, and Bachman Turner Overdrive. Choral works by Morten Lauridsen. Music from people I've been blessed to become colleagues with, like John Kilzer. Music from my brothers Johnny Jeffords and Ed Kilbourne (who will be in worship and in concert at St. John's UMC in Memphis this Sunday). Ed can sing "Common Bread" and you'll think you're having Holy Communion... because you are. As Augustine said: when we sing, we pray twice. When I am feeling low, music helps pick me back up so I can communicate with God - in which I mainly need to listen.

We, and our faith, are the products of our past and the memories of our past: good, bad, ugly, times when we've been 100% assured, and even times when we 100% doubted. Mysteriously and wonderfully, God uses the good and redeems the other. And doubt? Frederick Buechner once said that "doubts are the ants in the pants of faith. They keep it awake and moving."