Being Binary in a Quantum World 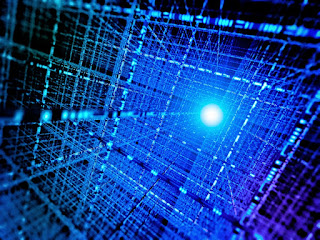 Since I've been alive, I've heard this phrase every four years: "This is the most important election ever." After considering 240 years of American history, I think it's safe to say this: that's a cart full of horse apples. Yet in the process, I am viewing the most heinous behavior between otherwise peaceful and loving people in this election. And while I have no scientific studies to back this up, the number of domestic and church-related interpersonal conflicts is way, way up. We are behaving badly in this election year. And in my denomination of the United Methodist Church, we are also behaving badly. I wish General Conference years didn't coincide with U.S. election years - I think it just heightens the rhetoric and toxic behavior.

There are fundamental problems with this. It's not Christian. It's not good science. This way of thinking is evidently not just wrong, it's toxic to us as human beings.

It's not Christian. Both scripture and Christian make it plain that we are to be in the world but not of the world. Counter-cultural. Radical. Followers of another way. Being lukewarm is the way of the world. Our "yes" is to be the yes of the way of Jesus - the True Way. It confounds worldly logic, and it won't get you elected to office. It might even lose you friends and family. Jesus was pretty clear about that.

It's not good science. We don't live in a binary creation - we live in a quantum creation. Already, scientists are working on quantum computing, where a bit of information can be a 1, a 0, or BOTH at the same time. Subatomic particles - the most basic parts of our creation - act this way.

Of course this way of thinking is threatening, because it's messy. But messy is reality: life is messy. Relationships are messy. Church is messy. I suspect that's why Jesus wore a towel instead of carrying a briefcase. Our decision-making as Christians has to be built upon a quantum model instead of a binary model, lest we be worldly Christians instead of heavenly ones.

Scientist Niels Bohr said, "If it does not boggle your mind, you understand nothing." But I think the prophets and apostles said as much long before Niels Bohr. Our best wisdom is - at best - foolishness to God. It's just not as simple as either/or.

We live in a both/and world. God, creation, and science seem to agree with that. Shouldn't we be in sync with these things, rather than our own creations? We are made in God's image, not the other way around.