We believe in the Holy Spirit, the Lord, the giver of life,
who proceeds from the Father and the Son...

Basically (and this is VERY basic; you can read books, dissertations, catechisms, and the like if you want to know more), it can be illustrated thus: 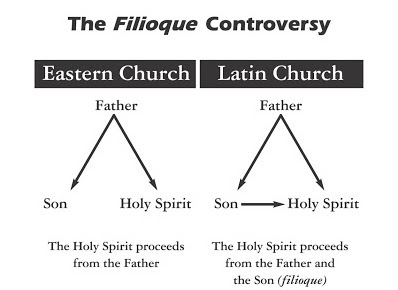 That one sentence split the largest part of Christianity in half. The timeline of it all:

Now, is this important? From a theological point, yes. And you can find scriptures to back both the Eastern stand and the Western stand. But is it a deal breaker? If we get it right or get it wrong, will it really make that much difference? I liked what commentator Bill Muhlenburg said:

[M]any Christians may find all this going over their heads, and/or see it as all rather unnecessary. The truth is, theology matters, and sometimes the complex truths of God and about God need to be hammered out as best we can. And at times disagreements will arise.

The matters here are very significant indeed, yet nonetheless one can differ on these matters, or even choose to concentrate on other matters. Thus one’s salvation is not directly impacted on which way we run with this issue.

In addition, I would add these as not directly impacting one's salvation (and these are more particular to United Methodists Christians), but can certainly run to the level of schism in some people's minds:


1. Theories of Atonement are just that: theories. Atonement theories can be derived from scripture, but you won't find any one of them explicitly outlined. My hunch is that Atonement is a mixture of all these things, and a mystery.

2. Real Presence. I'm not a Thomist or an Aristotelian, so explaining transubstantiation to someone else is difficult when I have my own problems grasping these schools of thoughts to begin with. I've always leaned with the Eastern church and Anglican Church that did not accept the notion of "transubstantiation" or the notions of "substance" or "accidents." These are the wrong schools of thoughts to deal with a mystery of faith like the sacraments.

3. Rebaptism. It doesn't make much sense (especially if we believe God (and not us) is the act-or in baptism). I'd never do it for the same reason I'd never get recircumcised - it's already been done. But if someone does, I don't think they're going to hell for it.

4. Women Being Ordained. There are good biblical arguments for and against it. For whatever reason, some of the churches that Paul addressed had women who were out of line about something. At the same time, Paul refers to Phoebe in Romans 16 as a deacon/διάκονος; not a female "helper" but as one holding an office of leadership and service. So while Paul wanted some women to be silent in some places, he evidently wanted others to speak, teach, and serve (add Junia and Priscilla to the list). If we took Paul literally when he initially spoke to the Galatians, none of us have any business preaching the gospel, because we're all stupid and foolish.

5. Ordaining Licensed Local Pastors. I've written about this one aplenty. It's ecclesial malpractice to put someone in a congregation with the authority of the ordained office without the benefit of ordination. All ordination in United Methodism is a charism, a gift from the Church that can only be exercised under authority. Clericalism in United Methodism needs to take a hike. I treasure my master of divinity degree and am thankful for my education. But it is clearly nothing more than a tool in my belt, and certainly not required by either scripture or Early Church decree (and if it gets anymore expensive, our clergy will only come from the upper class or from those with rich uncles and aunts).

6. Divorce. I hate that it happens. And contrary to what some say, I don't think there's ever any such thing as a "good" divorce. I also don't believe God intended us to do harm to each other, particularly harm to body and soul. I don't know an annual conference in United Methodism that doesn't have divorced clergy within their ranks, progressive and conservative alike. Some of them divorced more than once. When did it become "okay?"

7. Being Gay. I've been a pastor and counselor (more accurately a listener) since I was 21 years old. I've heard parents (a) apologize for, (b) weep over, and/or (c) brag about their gay children. I've listened to gay folks who have begged God to replace their orientation with that of being heterosexual. I've counseled gay folks who are angry at God: "Why am I this way? If it's wrong, then why did God make me this way?" Worse: "I tried to be married to my wife/husband. I really, really tried. But they knew even better than I did that it simply wasn't going to work. No matter how hard I try, I can't fake being straight." Clearly, it's not a choice.

All of these things - as well as so many more I haven't listed - can split a church, if we let it. The question to me is: why do we let it?

Maybe it's just the "cool" thing to do these days. We gotta keep up with our politicians, you know. Never pass up a chance to be in, or start up, a good schism.

We'll see how God and history look at us in twenty or so years. I hope with grace and forgiveness that we do not deserve.