Besides this, you know what time it is, how it is now the moment for you to wake from sleep. For salvation is nearer to us now than when we became believers; the night is far gone, the day is near. Let us then lay aside the works of darkness and put on the armor of light; let us live honorably as in the day, not in reveling and drunkenness, not in debauchery and licentiousness, not in quarreling and jealousy. Instead, put on the Lord Jesus Christ, and make no provision for the flesh, to gratify its desires. – Romans 13:11-14

For those of you who have been in the Church for a while, you know that Advent is the season of preparation – and you probably know the story well enough to preach it yourself. Advent and Lent have a lot in common: preparation, examination, discipline, patience. I would add to this list endurance. 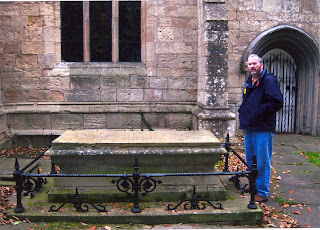 One of the trips I made in England was to Epworth, where John Wesley’s father Samuel was parish rector at St. Andrew’s Anglican Church, and the town where the Wesley’s children grew up. Everyone knows that Wesley started the Methodist movement, but some forget that it was not without cost. Wesley’s work was frowned upon by the Anglican Church, because Wesley was ministering to the poor and commoners and preached “to the masses” (something considered “vile”), and he was banned from every pulpit in England – including his home parish. So when Wesley did preach at his home church, it was while outside, standing upon his father’s tomb – where he couldn’t be banished since it was family property. (You can click on the picture to see a larger view) 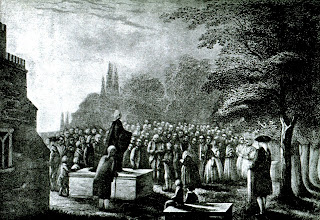 Two things: (1) We are not "just ourselves" – we stand upon someone’s shoulders. Wesley preached standing on top of his father’s tomb – the man who literally gave him life and whose legacy propped him up to stand tall for the faith. (2) God does not promise to spare us suffering, but He does promise to be ever-present in our lives and our faith.

Preparation is sometimes arduous and frustrating – some things will get in our way, some people will try to trip us up, and it is very easy to grow weary and wonder if Jesus will ever come! The tension – and the miracle – of the Advent season is that we prepare not just for the Christ who is coming, but the Christ who has already come. He came to save us – and comes to save us still.